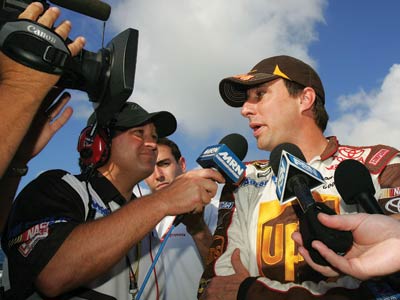 ­Some people race for fun, some race for money. For others, racing is simply in their blood. David Reutimann is one of those drivers.

A third-generation racer, Reutimann got his start at the dirt tracks -- something he still does today -- just as his father did. The similarities do not end there, however. When Reutimann suits up for the Sprint Cup Series, he drives car No. 00, the same number his father, Emil "Buzzie" Reutimann, drove.

Though he has accumulated a number of top finishes in his NASCAR career, Reutimann's racing days have not been purely smooth sailing. In November 2008, he lost his crew chief, leading to three different crew chiefs in just three seasons. The shift from Ryan Pemberton to Rodney Childers wasn't all bad for Reutimann, however, as he won his first NASCAR Spring Cup Series Pole Award at the Homestead-Miami Speedway just days after announcing his new chief [source: USA Today]. Reutimann won his first NASCAR pole in 2004, but this was his first Cup pole win.

Reutimann has competed in the NASCAR Craftsman Truck Series, the NASCAR Nationwide Series and the NASCAR Sprint Cup Series. Reutimann was hired with his current team, Michael Waltrip Racing, in 2007. In addition, he's had more than 200 starts with Toyota -- including his family's 00 number -- the brand he's been driving since 2004.

­Racing isn't Reutimann's only hobby, however. The driver ha­s hosted a charity golf tournament for the last four years in his hometown of Zephyrhills, Florida. The 2008 event raised more than $75,000 for Florida charities, demonstrating Reutimann's love for giving back to his community.

For more information about stock car racing and related topics, visit the links on the next page.

What were the stock car aero wars?
What are marbles and why do NASCAR drivers try to avoid them?
How NASCAR Safety Works