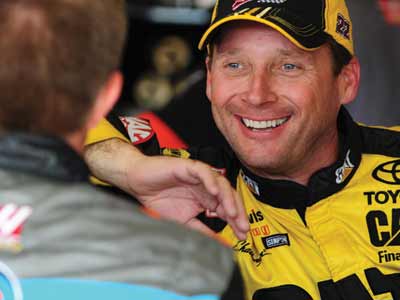 ­Though racing runs in Dave Blaney's family (his father and grandfather both dabbled in motorsports), he wasn't interested in stock car racing initially. But after starting out as a sprint car racer, he picked up many skills that helped to make him a smart stock car racer, and he couldn't resist the lure.

He had been involved with sprint car racing for several years before he tried racing in the NASCAR Nextel series in his rookie year of 1992, and for many years he tried to balance spring car racing along with stock car racing. He took a few years off from NASCAR after the 1992 season because he wanted to focus on earning a living for his

family through sprint car racing, but the NASCAR spirit never left him. He returned to stock car racing as a part-time racer in 1998 and became a full-time racer in 1999. To show his dedication to NASCAR, he moved his family from Ohio down to North Carolina.

­Amoco and Bill Davis Racing (BDR) signed Blaney as a racer in 1998. Since that initial contract, he's entered into a few other partnerships. Amoco had internal changes that caused them to leave the NASCAR sponsorship world in 2002, and at the same time, Blaney left BDR. He then joined Jasper Motorsports until Penske bought them out. Blaney could only race part-time in 2004 until 2005, when Richard Childress Racing (RCR) provided an opportunity for Blaney to race full-time. After all of the changing sponsorships, Blaney returned to BDR for the 2006 series as the number 2 Caterpillar car. He's still driving a Toyota Camry for them today [source: Toyota].

Racing Career: 1992 to the present