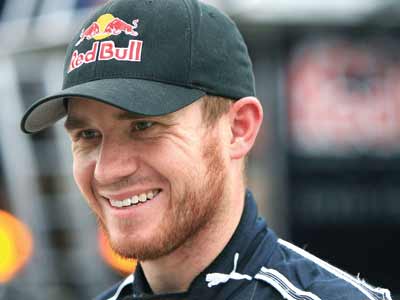 ­Brian Vickers could not have asked for a better backdrop for his childhood as an up-and-coming NASCAR racer. He was born in Thomasville, NC, near the major hub of the NASCAR universe. So far during his budding career, he's tackled two of the three NASCAR divisions -- the Busch Nationwide Series and the Nextel Cup Series. He is a promising young racer that is sure to be a name to follow in the coming years of this popular motorsport.­

Like many racers, Vickers got his start early. After saving his allowance, Vickers bought a yard-kart when he was 8 years old. Thanks to a recommendation from a family friend, Vickers moved on to competitive go-kart racing in the World Karting Association (WKA). With all the success in the WKA, Vickers decided to move on to three-fourths scale stock cars in the Allison Legacy Cars Series. Vickers proved to be good competition in that series and soon moved on to Late Model Stock racing in NASCAR's Weekly Racing Series in 1999. Next on Vickers' to-do list -- conquer USAR Hooters ProCup Series. He did that by nabbing the Rookie of the Year award and making several impressive wins. The only obvious move from there was the NASCAR Busch Series [source: Toyota].

In the Busch Series, Vickers eventually became the youngest Busch Series champion in 2003. Vickers earned a full-time NASCAR Nextel Series spot in 2004 as the No. 25 car for the Hendrick team. Vickers, not a timid rookie, held the fastest speed that year at Richmond, checking in at 129.235 mph (207.97 kph).

­He has driven th­e No. 83 Toyota Camry for Team Red Bull since the 2007 season. In October 2008, Brian Vickers' car was found in violation of a few NASCAR Sprint Cup Series regulations. As a result of the findings of the inspection, NASCAR suspended and fined Vickers's crew chief, suspended the car chief and fined and penalized Vickers and the owner. This was only a temporary setback for Vickers and crew [source: USA Today]. Vickers remains one to watch in NASCAR.