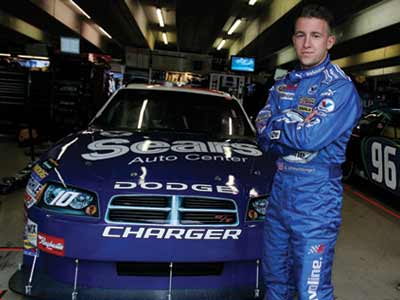 ­AJ (Anthony Joseph) Allmendinger is comparatively new to the NASCAR Nextel racing circuit. He officially began his career as a racer in 2007, though he's loved anything with wheels since he was young. After starting with BMX biking, Allmendinger switched to a quarter midget car at 8 years old and began a life-long love of racing.

Karting led Allmendinger to the world of open-wheel racing machines in 2001. He won numerous awards as a promising young driver, in addition to taking the Rookie of the Year award for the Barber Dodge Pro Series (BDPS). He set records for the BDPS.

In between his earlier four-wheeled forays and his current NASCAR Nextel adventures, he started in the Toyota Atlantic Series under the direction of Carl Russo's RuSPORT team. He was successful in the Toyota Atlantic series, taking many victories and yet another Rookie of the Year award. All of the victories from his 2003 season pushed him into champion status as the winner of the Toyota­ Atlantic Championship, making him the second-youngest person to do so. In 2004, RuSPORT and Allmendinger moved into the Champ Car World Series, where he proved victorious again, earning the AUTOSPORT International Rookie of the Year title. He was the first American ever to bring home the trophy.

During this time, Allmendinger had been fostering a relationship with Red Bull. It was mutually beneficial for the two, considering Allmendinger loved drinking the energy drink and Red Bull had nominated Allmendinger for the Red Bull F1 Driver Search. Bill Davis Racing (BDR) asked Allmendinger to race in the NASCAR Craftsman Truck Series with a Toyota Tundra truck. Red Bull noted his success with the Toyota trucks and signed him onto the NASCAR Nextel circuit for the 2007 season [source: AJ Allmendinger].

Red Bull released Allmendinger, and for the 2009 season, he'll be racing full-time with Gillett Evernham Motorsports [source: Crandall]. To learn more about Allmendinger, NASCAR and related topics, head over to the next page for some interesting links.