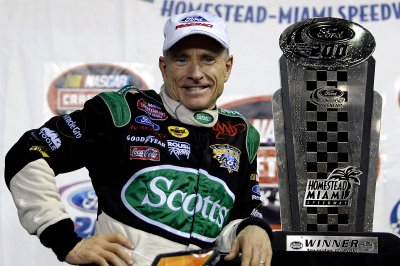 Mark Martin is one of the most successful drivers on the NASCAR circuit, a focused veteran who over his long career has earned the admiration and respect of fans and competitors alike.

Born in Batesville, Ark., on January 9, 1959, Martin had a burning desire for competition from an early age. He was already a formidable competitor around Arkansas's dirt tracks by the time he got his driver's license. He then moved on to ASA (American Speed Association) racing, where he soon dominated. He was named the ASA's Rookie of the Year in 1977 while still in high school. From 1978 to 1980, he won three consecutive ASA titles.

Martin first made the jump to NASCAR in 1981, winning a couple of poles and finishing in the top 10 twice while fielding his own team. He had ambitious plans to race a full NASCAR schedule the following year, but luck was not on his side. In spite of a promising start, Martin was woefully underfunded against established competitors and struggled as the 1982 season wore on.

Martin was eventually forced to auction off his shop equipment to settle his mounting bills and start over from scratch. After a short-lived stint with team owner J.D. Stacy and a few part-time rides with low-budget teams during the 1983 season, Martin returned to ASA, winning a fourth championship in 1986.

Rebounding from his discouraging early NASCAR forays, Martin met with new team owner Jack Roush in 1988. Roush was in the process of assembling his first NASCAR team after a string of successful ventures in other racing venues. The pair clicked, and Roush hired Martin over several prospective drivers. Their relationship would prove to be one of the longest-running and most successful driver/owner pairings in NASCAR history.

Martin's first NASCAR win was the 1989 AC Delco 500 in Rockingham. "My life is fulfilled," he said after the victory. "My goal in life has been to win a Winston Cup race." Little did he know that his life was about to get much

From there, Martin went on to amass an impressive record of 35 wins during a 20-year span with Roush Racing. Martin's record is an enviable one for any driver, but one goal has remained achingly elusive: a NASCAR championship.

In 1990, Martin finished second in the standings, a mere 26 points behind champion Dale Earnhardt. More heartbreaking was the fact that Martin's team was penalized 46 points at Richmond for running a carburetor spacer that was a half-inch too thick.

As it turned out, the penalty cost him the championship. Martin would be runner-up in the points standings three more times -- in 1994, 1998, and 2002 -- but thus far has not snagged NASCAR's ultimate crown.

But as he has continuously shown, Martin is not deterred by setbacks. His disciplined lifestyle, which includes a strict physical-fitness regimen, has made him a more focused competitor. Throughout his career, he has displayed an almost superhuman tolerance for pain, continuing to race despite such physical and mental hardships as multiple broken bones from previous crashes, intense back pain that ultimately required surgery to correct, and the tragic 1998 death of his father, stepmother, and half sister in a plane crash.

Martin had intended to retire from Roush Racing at the end of the 2005 season but stayed on at Jack's request. Martin's NASCAR career may be in its twilight, but his competitive spirit still burns. Whatever the future brings for Mark Martin, his place in NASCAR history is secure.