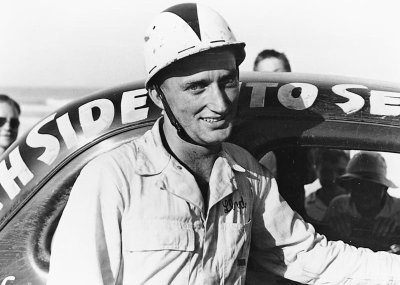 Lloyd Seay was regarded by NASCAR founder Bill France, Sr. as the "greatest stock car driver who ever lived." That's high praise from the man who organized and nurtured stock car racing into the slick production it is today. It is even more remarkable considering Lloyd Seay never competed in a NASCAR race. He was murdered nearly eight years before NASCAR was ­incorporated.

"I raced against Lloyd before the war," France said in 1984. "He was the best pure driver I ever saw, and I have seen 'em all."

Seay was born in the north Georgia hills on Dec. 14, 1919. An adventurous sort, Seay grew up on the rough side of the tracks and hung around the lawless characters of his rural ­surroundings.

In his early teens, Seay became involved in whiskey tripping, transporting "hooch" from one point to another -- usually with the police and revenue agents in hot pursuit. His exploits behind the wheel of a car on the twisting switch­back roads of Georgia became legend. "He was wide open all the way," said Raymond Parks, a tycoon among race-team owners before and immediately after the war.

Stock car racers of the time dealt in thrills and spills, defying sanity and logic. Seay's ability to hang a car on the edge made him an instant threat to win races, particularly with the support of Parks and Red Vogt, the game's top mechanic. At the age of 18, Seay entered his first stock car race at Atlanta's Lakewood Speedway -- and prevailed.

A hard-boiled speed merchant, Seay's rise to stardom was meteoric; success was a constant companion. He could find as many ways to win as there were opportunities.

In 1941, Seay won three races of national importance. In the Aug. 24 race on Daytona's Beach-Road course, Seay bolted from his 15th starting position to lead the opening lap. He romped to victory, finishing 31/2 miles ahead of runner-up Joe Littlejohn. Seay then won with ease at High Point, N.C., on Aug. 31.

Next, Seay packed up and headed for his home in Atlanta and the annual championship event at Lakewood Speedway on Labor Day, Sept. 1. Seay started near the back of the field, having missed qualifications while in North Carolina. By the 35th lap, he had grabbed first place. Seay outran the field the rest of the way to post his third win in nine days.

Only hours after accepting accolades for winning one of stock car racing's most sought-after prizes, Lloyd Seay was shot to death by his cousin, Woodrow Anderson. According to police reports, the two got into an argument over some sugar Seay purchased on Anderson's credit.

Raymond Parks, who admired the youngster and had provided him with a speedy race car, arranged for an unusual tombstone to rest over Seay's burial place. Seay's famous #7 Ford coupe was engraved in relief and the driver's window was carved out. Inserted in its place was a photo of Seay, mounted in a crystal cube.

Largely unknown today, Lloyd Seay generated excitement and showed fans what stock car racing was all about simply by how he drove a race car. The moment when he geared up for the start of a race brought out his electric, elegant best.