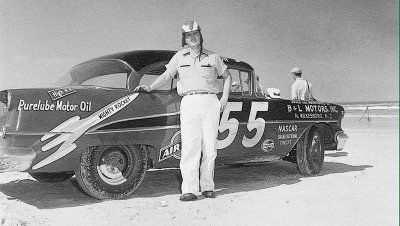 Junior Johnson went from being a legendary NASCAR driver to becoming the most successful team owner of all time. See more pictures of NASCAR.

When writer Tom Wolfe dubbed Junior Johnson "The Last American Hero" in the March 1965 issue of Esquire magazine, the portly kid from Ingle Hollow, N.C., was already a legend. Growing up on a farm in Wilkes County, Johnson, like many of the pioneers of stock car racing, developed his driving skills running moonshine as a young man. He was one of many drivers who easily transferred his moonshine experience to the highly pitched pavement of the NASCAR superspeedways.

In his first full season, he won five races and finished sixth in the 1955 NASCAR Grand National points standings. If NASCAR had a Rookie of the Year at the time, Johnson surely would have won it.

The following year, an unscheduled trip to prison in Chillicothe, Ohio, derailed his racing activities. Johnson was nabbed by federal agents at his father's moonshine still in the Carolina mountains, and served 11 months of a two-year sentence.

Johnson returned to the NASCAR scene in 1958 and picked up where he left off, winning six races. In '59, he won five more NASCAR Grand National races and was regarded as one of the most capable short-track racers in the ­business.

Johnson was a master in the artistry of dirt-track racing, painting a perfect set of grooves in the tight corners of any dirt canvas. "The two best drivers I've ever competed against on dirt are Junior Johnson and Dick Hutcherson," said two-time NASCAR ­champion Ned Jarrett.

Fifteen of Johnson's first 16 NASCAR Grand National victories came on dirt tracks. He was regarded as a one-dimensional driver -- a prodigious craftsman on dirt, but not well-versed on superspeedways.

That all changed in the 1960 Daytona 500 when Johnson drove an outdated and underpowered Chevrolet to victory in the ­second running of NASCAR's biggest event. Utilizing the draft for 450 miles, Johnson tagged along behind the speedier Pontiacs, then thrust his way to victory in the final laps. His follow-up wins at Charlotte and Darlington solidified the notion that he could obviously mix more than a little brainpower with his brawn.

Johnson's finest season came in 1965 when he won 10 races and 13 poles while driving Fords for team owner Rex Lovette. He led the NASCAR Grand National brigade by leading 30 races for 3998 laps, both tops for the campaign. He completed 7,144 laps in '65 and he led 56 percent of them. If it hadn't been for 19 DNFs, Johnson might have set all sorts of records that year.

When he retired in 1966 at the age of 34, Johnson had accumulated 50 NASCAR Grand National victories, tied for second best on the all-time list. He often said, "I'd rather lead one lap and fall out of the race than stroke it and finish in the money."

In 313 starts, Johnson finished among the top three positions 91 times, but he failed to finish 165 events. "Go or blow was always my philo­sophy in racing," said Junior.

During his career as a team owner, his cars won 119 races, not including 21 events from 1971 to '74 when he managed a Chevrolet team owned by Richard Howard.

Johnson became the most successful team owner in NASCAR's Modern Era. From 1976 to '85, Johnson's cars won six NASCAR championships, three each with Yarborough and Waltrip. Yarborough's ­trifecta in 1976, '77, and '78 remains the only time a driver and owner have won three consecutive titles.