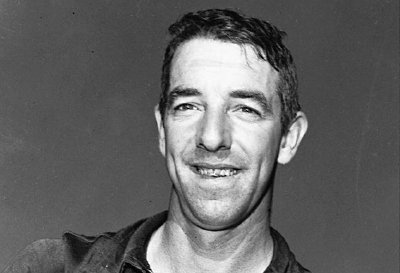 Herb Thomas of Olivia, N.C., was NASCAR's first superstar. Thomas, the first driver to collect more than $100,000 in career earnings, won 48 NASCAR Grand National races and was the leading race winner for three consecutive seasons. He bagged the Southern 500 at Darlington three times and captured the NASCAR championship twice. He did all of this in just seven full years on the major league stock car racing circuit.

Thomas was the hardest charger in the early days of NASCAR. When he didn't win, he usually wrecked or blew the car up trying to do so. "It's win or bust with me," Thomas said. "Second place is never good enough."

Thomas' rustic beginnings in stock car racing were like most others of the day. In 1946, he went to watch a Modified race at Greensboro, N.C., and the following week he had a car out on the track himself. While competing in a few scattered Modified races, Thomas ran strong but rarely ­finished. He didn't win a single race.

When Bill France orchestrated the Strictly Stock circuit in 1949, Thomas built a late-model automobile for competition. He struggled once again, coming up winless until late in the '50 season when he won at Martinsville. "My money was running low," Thomas recalled years later. "I was really disgusted. I thought about quitting racing and going back to the sawmill business. But when I won Martinsville, I decided to stick around a little longer."

The Martinsville triumph set the stage for the 1951 season. Thomas drove three different brands of cars -- Hudson, Plymouth, and Oldsmobile -- and put them all into victory lane. He won seven events in 33 starts and snared the NASCAR Grand National ­championship.

From 1952 to '54, Thomas came home first in 32 races and finished no worse than second in the points standings.

During his title defense in 1955, Thomas had a bad spill at Charlotte's dirt track. The car tumbled over and Thomas was tossed onto the track surface. He was rushed to the hospital where he was laid up for several weeks. From his hospital bed, he made a bold prediction: "Don't worry about me, I'll be racing again by the time the Darlington 500 comes up in September. And I'll win it again, too."

He was out of the hospital by August and won his second start at Raleigh, N.C., in a 100-miler. The next week, Thomas made good on his promise, driving a Chevrolet to victory in the Southern 500. Despite missing 22 of the 45 races in 1955, Thomas still finished fifth in the final points standings.

Thomas' last full year in racing was 1956, a season in which he should have won the title a third time. Instead, a set of circumstances ended the career of America's best stock car racer.

Thomas started the 1956 campaign in his own Chevrolets, but joined Carl Kiekhaefer's powerful Chrysler and Dodge team at midseason. After winning three NASCAR Grand National races for Kiekhaefer, Thomas bowed out and returned to his self-owned team.

"He was sending me to places I didn't want to go," Thomas said of the demanding Kiekhaefer. "He sent me all the way to California for a 100-miler when I wanted to stay closer to home where there were a lot more races. I finally quit him because I felt I could do just as good in my own cars."

With five races left in the season, Thomas was on top of the points standings. But Kiekhaefer leased a couple of tracks late in the season, quickly arranged for a NASCAR sanction, and gave his drivers Buck Baker and Speedy Thompson additional shots to overtake Thomas.

One of those races was a 100-miler at the Cleveland County Fairgrounds in Shelby, N.C., on Oct. 23. Thomas started 13th, but charged into contention by the halfway point. He took second place from Thompson down the backstretch. Before they reached the third turn, Thompson tagged Thomas' rear bumper, sending the two-time champion headfirst into the outside guardrail.

Thomas' car pierced the steel plate retaining barrier and was a sitting duck for the onrushing pack of cars. At least six cars plowed into Thomas. He was lifted from the car ­unconscious, suffering from a cracked skull. Critically injured, he underwent brain surgery and missed the rest of the season. Buck Baker went on to win the championship for Kiekhaefer.

Miraculously, Thomas recovered from the devastating injuries. He made two token appearances in 1957, then retired. "It's too much dog-eat-dog out there now," Thomas admitted at the time. "I used to pass everyone in the turns. Now they pass me in the turns. It's time to hang it up."

Thomas did make one other appearance at North Wilkesboro in 1962, but the competitive spark was gone. "Shucks," Thomas said, "there's no use in running if you can't be first. So I quit again, and I quit for good."