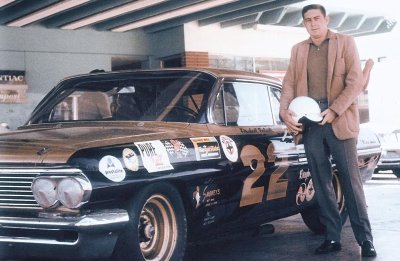 Fireball Roberts was NASCAR's most  the 1950's and '60's. A fiery crash tragically ended his career. See more pictures of NASCAR.

The inscription on Glenn "Fireball" Roberts' tombstone says it all: "He brought stock car racing a freshness, distinction, a championship quality that surpassed the rewards collected by the checkered flag."

Fireball Roberts was one of NASCAR's most electrifying speed merchants in the 1950s and early '60s. As stock car racing began squeezing its way into the sports mainstream, Roberts was the most recognized name in the rough-and-tumble sport.

His nickname originates from his prowess on the pitcher's mound as a hurler for the Zellwood Mud Hens American Legion semi-pro baseball team. His blazing fastball was more like a fireball, according to most of the hitters who faced him. He applied the same kamikaze ­attitude whether slinging baseballs or racing stock cars -- he was wild, rambunctious, and electrifying.

Roberts began his stock car racing career in 1947. In his first couple of years, he rarely won, but gained notoriety by the way he played the game. As he gained maturity, Roberts became a consistent winner. Inspired and guided by neighborhood idol Marshall Teague, Roberts had made great progress. A blend of bravery, lightning-quick reflexes, and ­precise judgment were his signatures.

He scored his first NASCAR Grand National victory on Aug. 13, 1950, at Hillsboro's Occoneechee Speedway. At the tender age of 21, Roberts spanked the field in only his third career start. While he tasted early success in NASCAR's elite stock car racing division, Roberts preferred the appealing Modified division, which had speedier cars with virtually no engine restrictions. When the auto industry shoveled millions of dollars into the NASCAR Grand Nationals, Roberts was a hot commodity.

The factory Ford team added him to its roster in 1956, and he responded with 13 wins over the next two seasons. When the factories retreated in the summer of '57, Roberts finished out the year then sold his equipment. He had no inclinations of being a team owner. For '58, Roberts accepted a ride with Frank Strickland's Chevrolet team, and won six of his 10 starts.

In 1959, Fireball teamed with Pontiac's Smokey Yunick, and the pair became the most feared team in NASCAR. A shining example of excellence, Roberts and Yunick set dozens of speed records. Roberts was a master in qualifying, taking nine poles in 17 starts in '59 and '60. He won three races, and would have won several more if the tire companies had been able to produce a rubber compound that could've withstood his heavy right foot.

Despite being one of NASCAR's epic risk takers, Roberts possessed an intangible that many other racers lacked -- intelligence. A thinking man's racer, Roberts was a master on the high-speed Daytona International Speedway, winning the summer Firecracker 250 and 400-milers three times in five years. He also captured the 1962 Daytona 500 in a Pontiac groomed by Yunick.

During the 1962 Daytona Speedweeks events, Roberts compiled a record that is unsurpassed. He won the American Challenge, an All-Star invitational event open to the previous year's race winners. Roberts beat Joe Weatherly by a half car length in the thrilling contest.

Roberts followed by claiming the pole for the Daytona 500, winning his 100-mile qualifying race, and dominating the Daytona 500. He came back in July and bagged the Fire­cracker 250. His slate for Daytona in '62 was a portrait of perfection.

Roberts joined the Ford team in 1963 and won four races in 20 starts, including his second triumph in the Southern 500. As a member of the Holman-Moody team, Roberts and teammate Fred Lorenzen ruled the roost.

Roberts was mulling the prospect of retirement in 1964, having just taken a prominent public relations position with the Falstaff Brewing Co. In what was scheduled to be one of his final race appearances, Roberts entered the May 24 Charlotte World 600. He wanted one last crack at Charlotte Motor Speedway, the only superspeedway in the South where he had failed to score a win.

Roberts was running with the leaders on the eighth lap when Junior Johnson and Ned Jarrett hooked bumpers and slid sideways off the second turn. Roberts looped his car to avoid a direct hit but careened into the edge of a concrete wall inside the backstretch. Roberts' Ford burst into flames and tumbled over.

Jarrett climbed out of his burning car and helped pull Roberts to safety. Critically burned, Roberts lay in a Charlotte hospital bed for 39 days before succumbing to his injuries. The life of America's top stock car driver was over at the all-too-early age of 35.

Why are green cars considered unlucky in NASCAR?
AJ Allmendinger
How RACEf/x Works