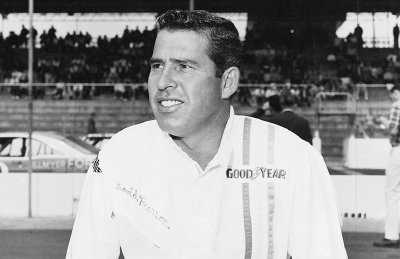 David Pearson was so beloved by his fans that they raised money to buy him his first NASCAR race car. See more pictures of NASCAR.

David Pearson never had any inclination to drive on NASCAR's Winston Cup Grand National tour. He was quite content to spend most of his free time chasing after $250 top prizes on the short-track Sportsman circuit.

"I used to listen to some of the big races on the radio," said Pearson. "I thought those guys must be crazy running 150 miles per hour at places like Daytona." Pearson, one of the top winners in weekly short-track competition in the 1950s, had a large following of fans, and unbeknownst to him, his legion of supporters was his ticket to the big time.

His fans in and around Spartanburg, S.C., were convinced he could make the grade in big-time NASCAR Grand National competition. So, in late 1959, they began a fund-raising campaign to get Pearson in a NASCAR Grand National car. Pearson's fans donated nearly $1500. Although that was a lot of money in 1959, it was about half the amount needed to buy a good used race car.

"I didn't want anything to do with that idea," said Pearson. "I wanted to give the money back to the people who donated it, but I didn't know where it all came from." Pulling the additional funds needed out of the family bank account, Pearson bought a 1959 Chevrolet from Jack Smith, who had campaigned his own cars quite successfully. Pearson made his plunge into NASCAR Grand National racing at Daytona's 1960 Speedweeks.

He didn't set the world on fire, but did perform admirably. Pearson was awarded the 1960 NASCAR Grand National Rookie of the Year, catching the eye of NASCAR officials with his steady efforts in 22 starts. His best finish was third, and he won one pole position.

In 1961, veteran team owner Ray Fox entered his Pontiac in Charlotte's World 600 without a driver. Pearson's name popped up as a possible chauffeur and Fox signed him to drive in the race. In a storybook ending, Pearson won.

Proving the Charlotte 600 was no fluke, Pearson won the Firecracker 250 at Daytona in a dramatic last-lap duel with Fred Lorenzen. He then topped off the season with a win in the Dixie 400 at Atlanta International Raceway. Pearson's victory at Atlanta was a noteworthy event in NASCAR history.

The speedy sophomore passed Bunkie Blackburn, who was driving Junior Johnson's Pontiac in relief, on the final lap. It was the first time in superspeedway history that a race had been decided by a last-lap pass. And it was the only lap Pearson led all afternoon.

Pearson joined the Cotton Owens team in 1963, and went on to win the '66 NASCAR Grand National championship. A year later, he replaced the retired Lorenzen on the famed Holman-Moody team and made two more concentrated attempts to win the champion­ship. In '68 and '69, Pearson won a total of 27 races and finished second 30 times. He won the championship both years, and became only the second driver in NASCAR Grand National history to win three titles.

After winning his third title, Pearson vowed never again to engage in the exhausting exercise of running the full tour. He had actively campaigned for the championship four times, and had won three of them.

In '73, he enjoyed perhaps his finest year. While competing in selected events, Pearson won 10 of his 15 starts on superspeedways and 11 out of 18 for the year. The winning rate of 61.1 percent remains the all-time record for winning percentage in a single season.

Pearson quietly retired in the late 1980s, having competed in 574 NASCAR Winston Cup Grand National races. He won 105 times, which ranks second on the all-time list. It will forever remain a mystery how many races he could have won had he competed full-time.

What is the history of stock car racing?
How NASCAR Engines Work
Why is it so hard to understand the NASCAR penalty system?