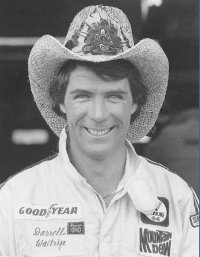 Darrell Waltrip was one of short-track racing's flash­iest speed artists during his ascent from weekly bullrings to the glamorous stage of NASCAR Winston Cup Grand National racing.

Armed with a positive attitude, supreme self-confidence, and some of the finest machinery in the weekly short track wars in the Tennessee-Kentucky area, Waltrip established an enviable portfolio in the late 1960s and early '70s.

Waltrip made a few appearances in the Midwestern-based Automobile Racing Club of America, winning twice. He whipped the invading United States Auto Club headliners in a highly publicized race at Nashville Fairgrounds Raceway in 1972, an event that got plenty of play in national racing publications.

Waltrip beat a field that included big names such as Bobby and Al Unser, Gordon Johncock, Butch Hartman, Roger McCluskey, Ramo Stott, and Jack Bowsher. Afterward, Waltrip fired a few verbal jabs at the USAC jet set, reminding everyone that he was headed to the top.

In 1973, Waltrip joined the NASCAR Winston Cup Grand National tour full time and actively campaigned for the Rookie of the Year award. Despite finishing second at Texas and grabbing a significant number of headlines, NASCAR selected Lennie Pond as its top rookie. Waltrip fired several verbal darts at NASCAR after the controversial decision. It wouldn't be the first time DW would lash out when he felt he was wronged.

In a matter of months, Waltrip gained the reputation of a very capable driver, but an individual who ruffled plenty of feathers. NASCAR racing in the early 1970s was ruled by a small and select number of established veterans -- David Pearson, Richard Petty, Cale Yarborough, and the Allison brothers to name a few. Waltrip had all the attributes to become a member of this select group, and he barged into prominence with his mouth running as fast as his race cars.

Waltrip dueled on and off the track with Yarborough, who nicknamed Waltrip "Jaws" after a crash at Darlington. He was scolded on occasion by Petty for aggressive maneuvers on the track. He sparred with rival team owners, too. M.C. Anderson, an energetic owner who at times spoke with an acid tongue declared that no matter how good Waltrip was, Anderson would never consider hiring him as a driver. "I'd fire him quicker than a New York minute," Anderson once said.

Waltrip also earned the wrath of trackside spectators, who responded with a chorus of boos when he was introduced before a race. The negative reaction bothered the flashy and articulate Waltrip. When he crashed at Charlotte one year, the huge throng cheered. In a radio interview that was played over the track public address system, Waltrip challenged his adversaries in the grandstands to "meet me in the Big K parking lot...and we'll duke it out."

After reflecting on the outburst, Waltrip said he was "embarrassed for the sport. It might have indicated the mentality of a race fan. I would hate to think that I could have a kid in the grandstands seeing the way people act. I would never take him back to a race." Those comments simply enhanced the jeers he received when he was introduced at future races.

Over the years, Waltrip matured and became a championship-caliber driver. In 1979, Waltrip lost a heartbreaker in the battle for the NASCAR Winston Cup Grand National championship. Leading by more than 200 points at midseason, many had conceded the title to Waltrip. But Richard Petty got his season in gear in the second half and passed Waltrip for the title in the season finale.

In 1981, Waltrip joined forces with Junior Johnson and the new team clicked. Waltrip won his first NASCAR Winston Cup Grand National championship, rallying from a large deficit in the final stretch. In '82, he again scratched and clawed his way past Bobby Allison to win the championship thanks to a late-season rally. In '85, he won the title for a third time, overtaking Bill Elliott with a late-season charge.

During his championship reign, Waltrip was still one of the most disliked drivers in the NASCAR kingdom. But all that changed on May 21, 1989, at Charlotte Motor Speedway during the running of NASCAR's fifth annual all-star race, The Winston.

Waltrip was running first as he approached the white flag, but then second-place driver Rusty Wallace hit the rear of Waltrip's Chevy, spinning him out. Wallace went on to victory and Waltrip publicly stated, "I hope he chokes on that $200,000 [winner's prize]. He drove into me and spun me out. It was pretty flagrant."

In an instant, Waltrip went from disliked bad boy to a popular champion. Waltrip was voted NASCAR's Most Popular Driver in 1989 and 1990 by the NASCAR's fans.

During his storied NASCAR Winston Cup career from 1972 to 2000, Waltrip won 84 races, fourth on the all-time list. Waltrip has further enhanced his public image as an analyst for FOX Sports, adding a touch of Southern charm to the current NASCAR NEXTEL Cup telecasts. Joining Mike Joy and Larry McReynolds in the broadcast booth, Waltrip is both entertaining and enlightening in his colorful commentary, much like he was as a racer.