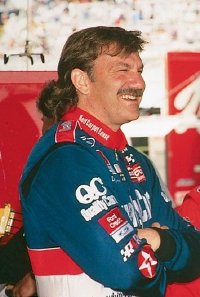 As a teenager, the younger Jarrett was respon­sible for chores that included mowing the grass. Possessed of an innovative mind, Jarrett conjured up an idea to reduce his labor at a small cost. He traded a golf club for two goats and stationed the hungry critters in a grass parking lot, which contained the remains of jalopies wrecked in races and demolition contests.

"All they would eat was the upholstery in the cars and the vinyl tops," Jarrett said years later. "The wouldn't eat grass if you put it in their mouths."

Jarrett got a few one-shot deals in NASCAR Winston Cup racing beginning in 1984 and landed a full-time assignment by '87. Success was slow to come, though. Jarrett only recorded a pair of top-five finishes in his first 110 NASCAR Winston Cup starts from '84 to '90.

Driving for the Wood Brothers Ford team in 1991, Jarrett's lengthy apprenticeship began to reap rewards. He scored his first NASCAR Winston Cup victory at Michigan, nosing out Davey Allison in a photo finish. He accepted a ride with the new Joe Gibbs team in '92 and was competitive, although he failed to record a victory.

In '93, Jarrett rallied past Dale Earnhardt on the final lap and won his first Daytona 500. The win was made more special by his father, retired NASCAR Grand National champion Ned Jarrett. Ned, color commentating for CBS Sports, became more of a proud papa than an impartial journalist as he rooted for his son to win. The call made great TV, and became one of NASCAR's most memorable moments.

After three years with the Gibbs operation, Jarrett moved over to the Robert Yates camp in 1995. He won once in '95 and then captured his second Daytona 500 prize in the '96 season opener. He also drove home first in the Brickyard 400, plucking the two biggest races of the annual NASCAR calendar.

Jarrett was a serious championship contender in 1996, finishing third on the strength of four victories. He finished a close second to Jeff Gordon in the '97 points race, took third in '98, and finally grabbed the crown after a sparkling season in '99. Jarrett nabbed the points lead after the 11th race of the season in May and never looked back. "The championship is my greatest accomplishment," Jarrett said. "I'm prouder of that than anything else."

In capturing NASCAR's most cherished prize, the Jarrett racing family became only the second father and son to win the NASCAR championship.

Jarrett's prowess continued into the 21st century. He contended for the title in 2000 and '01, finishing in the top five in points both years before slipping to ninth in the final standings in '02. Jarrett won at least one race every season from 1993 to 2003. Known as a Ford driver, Jarrett was one of the first to switch to Toyota for the 2007 season. His versatility and steadiness should help Toyota mount a serious threat.

Why are green cars considered unlucky in NASCAR?
What is the history of stock car racing?
1967 NASCAR Grand National Results