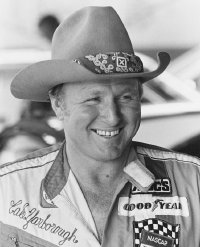 Cale Yarborough won three straight championships  1976 to 1978, one of  greatest feats in the  of NASCAR. See more pictures of NASCAR.

Born in Timmonsville, SC., Cale Yarborough made his NASCAR debut at the 1957 Southern 500 while still in his teens. He finished in 42nd place after a broken hub took him out of the race. Yarborough only drove in three more races over the next four years, never managing a top-10 finish. But that string was broken in 1962, when he placed tenth in a Daytona 500 qualifying race.

It wasn't until 1965 that Yarborough ran anything close to a full schedule, and he recorded his first win that year -- along with one of the scarier moments of his career. While attempting to overtake the leader during the Southern 500, Yarborough's Ford glanced off the other car, sailed over the guardrail at Darlington Raceway, and came to rest against a telephone pole outside the track. "I knew I was in trouble when I saw grass, because I know there ain't no grass on a racetrack," said Yarborough, who escaped the incident uninjured.

Though he didn't win any more races that year, Yarborough finished a respectable tenth in the point standings. After that, his race schedule was again cut back, but his win total kept climbing, reaching 14 by the end of 1970.

After starting just nine NASCAR races over the next two years (during which time he also competed in open-wheel Indy cars), Yarborough finally ran a full NASCAR schedule in 1973, and his career took off.

He won four races that year, including the Southeastern 500, where he led every lap from green flag to checkered. He rose from virtual obscurity to a top contender almost overnight, finishing second in the points standings behind Richard Petty. During 1974's 30-race schedule, Yarborough racked up an amazing 10 victories, but again finished second to Petty in points.

After winning "only" three races in 1975, Yarborough charged back in '76, recording nine victories -- and his first championship. He won the championship again in '77 and once more in '78, making him the only driver in NASCAR history to ever win three in a row. Though he would never get a fourth, Yarborough continued his winning ways, racking up 24 more victories before his retirement in 1988.

During his more than three decades in NASCAR, Yarborough left his mark on the record books and became one of the most popular and best-known drivers on the circuit. He won the prestigious Daytona 500 four times, and in 1984 was the first to qualify for the race at more than 200 mph. A career total of 83 wins puts him fifth on the all-time list, and his five consecutive wins in 1976 and 14 pole positions in 1980 remain single-season records.