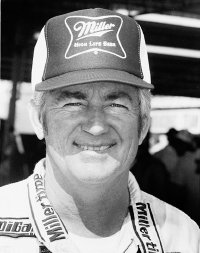 On July 12, 1966, a newcomer by the name of Bobby Allison won a NASCAR Grand National race at Oxford Plains Speedway in Oxford, Maine. The 28-year-old Allison outdueled Tiny Lund to win the 300-lapper on the 1/3-mile paved oval.

The spectators in attendance cheered Allison's arrival, who drove a self-groomed Chevrolet. It was the first win for the Chevrolet nameplate in NASCAR's premier series since Dec. 1, 1963, when Wendell Scott won at Jacksonville, Fla. The drought had spanned 155 races.

In an era when General Motors cars were rendered noncompetitive in the face of the big-buck Ford and Chrysler factory efforts, Allison became a leader of the "little guys" and the unheralded "bowtie brigade." The Hueytown, Ala., driver won three times in 1966, then started attracting offers from top-ranked teams. During his career, Allison won races for a dozen different team owners and drove eight different makes of cars into ­victory lane.

A brilliant driver for more than two decades, Allison became one of NASCAR's most prolific race winners. During his career, which lasted until 1988, Allison won 85 races, third in all-time rankings. His greatest desire, however, was to win the elusive NASCAR Winston Cup Grand National championship.

Allison came close on a number of occasions. In 1970, he finished second to Bobby Isaac in the final points standings. He might have won, but missing an early season race at Richmond left him with a deficit he was unable to overcome.

While driving for Mario Rossi's factory-supported Dodge team, which entered only major events, Allison had to build his own short-track car to run the smaller 100-milers that made up the bulk of the 1970 season. The car wasn't complete by the Richmond race in March, so he was forced to forego the event. If Allison had competed at Richmond, he would have only had to finish 24th or better to win the championship.

Allison won 10 races and 12 poles in 1972, but finished a close second to Richard Petty. Allison led virtually every ­category in '72. He had the most wins, won more poles than any other driver, led more than twice as many laps as any other driver, and led more races. He finished first or second in 22 of the 31 races. A season laced with excellence rewarded Allison with everything except that which he most wanted, the coveted driver's championship.

Three other runner-up finishes in the championship standings in 1978, '81, and '82 were bitter pills to swallow, especially in '81 and '82. In both years, Allison had built up big points leads only to see Darrell Waltrip rally in the closing stages to snatch the title. "I've come so close so many times," said a discouraged Allison in '82. "Maybe I'm never going to win a Winston Cup championship."

In 1983, while driving Buicks for the Charlotte-based DiGard Racing team, Allison again was a prime contender for NASCAR's highest honor. By May, Allison had climbed atop the standings and in a mirror image of the previous two seasons, he had a commanding lead by midsummer. But once again, Waltrip began his patented late-season charge and closed within 41 points heading into September.

This time, Allison was up to the challenge. He clicked off three consecutive victories at Darlington, Richmond, and Dover. A brief stumble at Rockingham allowed Waltrip to get within striking distance, but in the final two events of 1983, Allison finished third and ninth to wrap up the title.

"I've worked hard for a long, long time," said Allison after locking up the championship. "My wife Judy has worked with me, and so many people have supported me over the years. This is something I have wanted for my entire career and today I'm going to celebrate it. I just thank God for it."

Allison won the Daytona 500 three times with three different team owners -- Bud Moore, DiGard, and the Stavola Brothers. His win in the 1988 Daytona 500 was the 85th and final victory of his career, an event in which he finished just ahead of his son Davey in a stirring finish.

Later that year, Allison's driving career ended when he was seriously injured in an opening-lap crash at Pocono. A flat tire sent his Buick into a spin and Jocko Maggiacomo plowed into his driver's door. After a long recovery, Allison eventually returned to the NASCAR stage as a team owner.

Bobby Allison remains one of the greatest drivers to ever strap on a racing helmet, not only in NASCAR, but in any racing series. The fans adored his warm smile, his amiable attitude and, most of all, his irrepressible spirit.