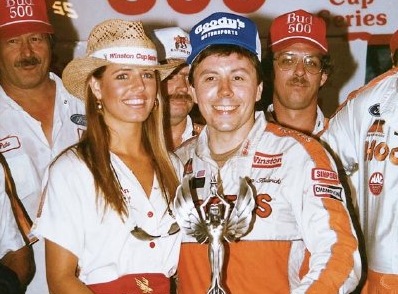 Alan Kulwicki, an underdog from the Greenfield, Wis., produced NASCAR's most unlikely championship run in the 1992 NASCAR Winston Cup season. He overcame the greatest late-­season deficit in championship history, and, along the way, gave hope to every small-time operator in NASCAR.

Kulwicki began the 1992 NASCAR Winston Cup season as one of the dozens of drivers with seemingly no realistic shot at NASCAR's most elusive prize. As an owner, driver, bookkeeper, and strategist, Kulwicki faced an uphill battle against the heavily funded and established teams.

But Kulwicki had a habit of doing things his way. Twice, the Wisconsin engineering graduate turned down offers to drive for legendary team owner Junior Johnson. Kulwicki thought he had the Maxwell House sponsorship tucked safely away in 1991, only to lose the big-buck sponsor to the Johnson team. Against all odds, Kulwicki still insisted on running his own operation.

Kulwicki barely made the field for 1992's season-opening Daytona 500, having to accept a provisional starting spot on the last row. He rallied from 41st to finish a credible fourth in NASCAR's most celebrated event. But three finishes out of the top 15 in the next seven NASCAR Winston Cup events left Kulwicki far behind the points leaders.

On the strength of consistent finishes and a couple of victories during the spring and summer, Kulwicki clambered back into contention, though still with slim hopes for the cham­pion­­ship. In the September race at Dover, Kulwicki crashed early after rubbing fenders with a lapped car. When the points were tallied following the event, Kulwicki trailed Bill Elliott by 278 points with just six races remaining.

"Realistically, this probably finishes us off in the championship deal," Kulwicki said after the Dover crash. "I don't like to give up, but I know it will be hard to come back now."

Kulwicki was aware of the intricacies of NASCAR's points system. It is impossible to catch up unless the points leader falls victim to a major dose of trouble. But Elliott and his Junior Johnson team stumbled down the stretch, encountering repeated mechanical problems that allowed the other contenders, including Kulwicki, back in the points race.

Entering the season finale at Atlanta, six drivers had a shot at the championship. Kulwicki was only 30 points behind points leader Davey Allison and 10 points ahead of Elliott. One of the most dynamic duels in the history of the title chase unfolded that afternoon at Atlanta Motor Speedway.

Allison's title hopes were dashed when he hit a spinning Ernie Irvan midway through the race. With Allison out of the hunt, the championship race took an interesting twist. There was a distinct possibility that for the first time in history, a tiebreaker would be used to determine the NASCAR Winston Cup champion.

Elliott, by virtue of leading Kulwicki 4-2 in race wins, held the tiebreaker. Both drivers led laps in the early going, and Elliott and Kulwicki were vying not only for the Atlanta win, but also for the most laps led. If Elliott could lead the most laps, he would pick up five additional bonus points. With Elliott and Kulwicki running first and second, if the finish stayed the same, Elliott could win the title on the tiebreaker.

During the final laps of the race, Elliott and Kulwicki had separated themselves from the other contenders. Paul Andrews, Kulwicki's crew chief, was keeping tabs of the number of laps each driver had led. He knew it was going to be close. Andrews was in constant communication with his driver and told him that if he could lead until the 310th lap, he would only need to finish second to wrap up the title. He would no longer have to beat Elliott to win.

Kulwicki stretched his fuel and made his final pit stop on the 311th lap. Elliott went on to win the race, beating Kulwicki by 8.06 seconds. But Kulwicki finished second and beat Elliott by 10 points for the championship.

"I thank God for the fortune to be here and to be an American and compete in the Winston Cup circuit," said a gracious Kulwicki in his impromptu acceptance speech. "When I moved down South [in 1986], this was my dream. I came here in a pickup truck and a trailer. I nicknamed this Ford the 'Underbird' because we were going into this race as the underdog.

"If you were to bet money back in '86 that I'd be where I am today, the odds were slim," said the new NASCAR Winston Cup champ. "When you consider everything it took to get here from there, you'd say it couldn't be done. But you can't look at it that way. I didn't. Obstacles are what you see when you take your eyes off the goal line."

Kulwicki's title run in 1992 was one for the ages. It proved that with determination, hard work, intelligence, and a little luck, a small-time operator could rise to the pinnacle of his profession.

In 1993, Kulwicki had begun his title defense in solid fashion, scoring three top-10 finishes in the first five events of the NASCAR Winston Cup campaign and holding down ninth in the points standings.

Following an appearance for sponsor Hooters Restaurants in Knoxville, Tenn., on April 1, Kulwicki was aboard the company plane to Bristol for the Food City 500. The twin-engine Merlin Fairchild 300 disappeared from radar six miles short of reaching the Tri-Cities Regional Airport and crashed into a meadow near Blountville, Tenn. The lives of Kulwicki, Mark Brooks, Dan Duncan, and pilot Charlie Campbell were lost.

The champion wouldn't have the chance to defend his title.