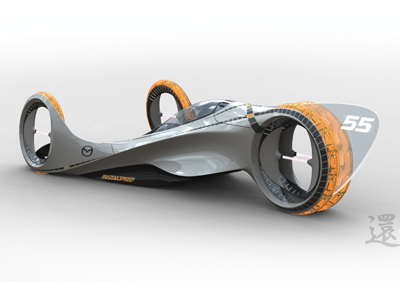 Ther­e's something about car racing that grabs the imagination. The speed and the danger make the sport seem romantic and glamorous while racing designs and technology have made their way into everyday life. The sleek shape of an old-fashioned toaster mimics the rake of the 1950's Formula One cars, while fashionistas wear jackets with mandarin collars and sneakers with rounded heels -- both designs originally developed for race car drivers.

Auto racing has influenced everyday products, but it has also influenced, well, car racing. Designers and engineers are constantly pushing toward that next record, toward even greater speed and control. While there are many types of car racing, and each has produced its own technical and design innovations, much of the innovation in car racing has come from the most popular forms of the sport, including stock car racing and Formula One racing.

­Of course, it makes sense that the most popular, and best-funded, types of car racing gave rise to some of the best known innovations. Some of the things that we take for granted in everyday car design, like aerodynamics, were developed from the early days of car racing when teams discovered that a car with a smooth and sleek body could cut through the air more easily, posting faster lap times. Even though racing is all about speed and handling, a number of safety innovations came directly from car racing, too. After all, if you're going to be going that fast, you need a good strong safety system in the event of a crash. This thought gave rise to such safety features as shoulder seatbelts and the concepts of safety cages and crumple zones. Even components that we now consider basic equipment on modern cars, such as disc brakes, also came from auto racing.

Yet the sport of auto racing continues to innovate. Today's race car engineers and designers are experimenting with lightweight materials, like carbon fiber, to make racecars safer and stronger while innovators interested in alternative fuels and propulsions systems are beginning to race cars that function completely different from the cars on the track at Talladega. It's tough to say where all of these new ideas will take racing, but the 5th Annual L.A. Auto Show Design Challenge offered a glimpse at the types of racecars some automotive designers are envisioning for the future.

Keep reading to see what some of the industry's most innovative thinkers believe race cars will look like in the year 2025. 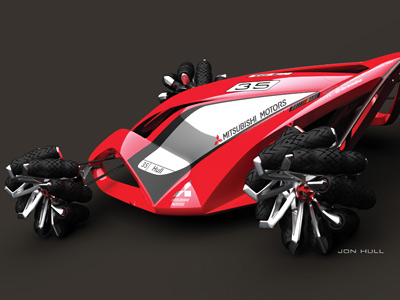 The purpose of the L.A. Auto Show Design Challenge is to highlight the innovation and imagination of automotive designers from around the world. The challenge is part of the L.A. Auto Show's Design Los Angeles, a professional conference for automotive designers. It's a chance for the people who literally shape what our cars look like to discuss challenges, share breakthroughs and generally strut their stuff.

Designers from Audi picture a car race with banks and tunnels that allow the cars to invert and pass someone by driving on the ceiling of a tunnel. Mazda's team imagined a racing series for electric cars, while General Motors imagined an eco-triathlon racing series. Honda's team stretched the limits of space, time and imagination by coming up with a race where competitors must circumnavigate the globe in 24 hours on land, air and sea -- and they must do it all in the same vehicle. Volkswagen's team imagined a fairly conventional Baja race track, but with the added rule that racers may only use 10 gallons (37.9 liters) of fuel to complete the entire course. Toyota didn't change the rules of Le Mans racing, but imagined a car reaching speeds of 350 miles per hour (563.3 kilometers per hour) that can change shape for optimal handing and also uses virtual reality to help the driver stay on-track.

While the teams come from a diverse group of automakers, each company has a racing heritage. Mercedes-Benz has perhaps the deepest racing heritage of the group, having raced cars for most of the 20th century. But even smaller companies like Mitsubishi are well respected on the rally-car circuit, while cars from General Motors have long been staples on American stock car racing tracks.

The designs that the teams brought to the design challenge at the L.A. Auto Show were as varied as the car companies that submitted them. However, there were a few common themes. Despite approaching the challenge from several different angles, and in some cases, designing cars for completely different forms of racing, each of the teams focused on alternative design materials as well as alternative fuels and propulsion systems.

BMW may have taken the idea of alternative design materials the furthest: For their entry, the BMW Hydrogen Powered Salt Flat Racer, they used barbeque lids and oil barrels as the main body components. Audi's entry had a dynamic space frame that made the car more flexible. Toyota's entry had photovoltaic panels on its body that supplied the car with extra energy when needed.

Both Mercedes-Benz and General Motors combined unique design materials with alternative propulsion. The Mercedes-Benz entry used a skin that harvested solar energy to power the car; it also had a giant sail to harness available wind power. The GM Chaparral Volt used solar power, gravity and momentum capturing devices, and rear turbines for wind power to win its races.

But those aren't the only alternative ways the designs were powered. The Audi entry used algae for fuel, while the BMW and Toyota entries were hydrogen-powered racers. Mazda's entry was electric, while the Volkswagen racer used biofuel.

Some of these technologies are more feasible than others. For example, hydrogen-powered cars are already on the road today, and technology for electric cars is continually improving, making at least the propulsion systems of some of these outlandish entries possible. Other entries, like Honda's car that effortlessly switches configuration for travel on land, sea and air (the team didn't specify how the car is powered), Audi's flexible frame vehicle or BMW's oil-drum wheels are clearly more farfetched. Still, technology is growing by leaps and bounds, so whether you see the design challenge as a clear look at the future of car racing, or just a fun exercise for the imagination, it's a pretty safe bet that in 2025, race cars will looks a lot different than they do today.

A common theme among the designs was the addition of a co-pilot. Many of the designs had robot co-pilots to assist the racecar drivers, while BMW's entry included a goldfish as a co-pilot.

Synchronized Driving Is Totally Cool; It Could Even Be Helpful
How Monster Jam Works
How NASCAR Tire Technology Works