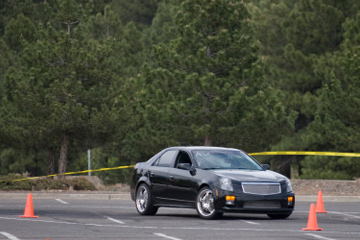 One of the more enticing elements of gymkhana over other forms of motorsport is that any car can be entered as long as it passes technical certification.

"This is one of the sports where you can sink a lot of money into it if you want, but you don't have to," said Eric Jacobs, a former autocross racer and drifting competitor. Jacobs now runs gymkhana events as part of the DG Trials race club he helped organize.

He said he has seen everything from a Toyota Supra drifting gem to a stock Saturn running the exact same gymkhana course. He said the variations within the course, as well as the large number of classes and allowances make it difficult for one type of vehicle to become dominant. Added to this is the large set of skills necessary to competently run the course.

"Two guys can show up at an event with the same exact car and compete and get totally different times," Jacobs said. "It comes down to who knows their car better, who knows the course better, and who can drive better. It's not really about the car."

Some of the general driving skills required to navigate a gymkhana course are found in many other forms of motorsport. For instance, a driver needs to maintain control at high speeds during a sprint between slalom portions or prior to a 360-degree turn as well as be able to sustain speed during controlled maneuvers.

Whatever car the driver chooses, he will be navigating a predetermined course he should have memorized and walked prior to the race. How the driver gets through that course, what tactics and line he chooses will be largely determined by his car, skill level, course terrain and a host of other factors, too. But as long as the car passes a technical inspection he can race. What the driver does from there is up to him.

Gymkhana's ease of accessibility, as well as the growing popularity of the sport, has caught the attention of the owners of small and large tracks and racing clubs across the country.