The History of Gymkhana 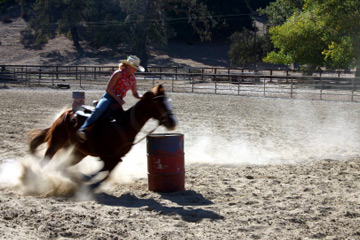 The origin of gymkhana predates the car by several centuries.
©iStockphoto.com/Darinburt

Gymkhana's history started long before the car was born. European and Asian horse cultures were among the first to establish timed riding events incorporating pylons and obstacles as a way of exhibiting horsemanship.

Some of the earliest events involved the famed Mongol horsemen of Genghis Khan, whose competitions included picking up small flags off the ground by sliding around and under the rider's mount while it was at full gallop. Native American riders often raced courses through the rocky desert terrain and reportedly, in a show of skill and bravery, rode close enough to galloping buffalo to slap their side before riding away.

More civilized events evolved as Europeans embraced equestrianism as an art as well as practical activity. Timed and skill contests were established and run at polo grounds throughout Europe and its colonies. Today many of those former colonies still embrace the sport and some of the largest equestrian gymkhana venues are located in India and Pakistan.

In the United States the sport has taken on a more festival and family appeal. The California Gymkhana Association, one of the largest groups of its kind, sanctions 13 separate events under the gymkhana umbrella. These include timed sprint events, obstacle courses and skill contests including riding out to a 24-inch high cone, placing a golf ball on the top of the cone, and riding back.

Unfortunately, gymkhana's automotive history is still unclear. Since it incorporates elements of other types of racing and a shifting set of rules and classes there's no real definitive way to say exactly when or exactly where it started.

The common belief is the sport originated in the United States during the financial boom following World War II. Soldiers returning from overseas brought back the small, nimble cars common in smaller European cities like the British Triumph, MG and Mini Cooper as well as the Italian Fiat. These smaller cars simply couldn't compete with the sheer horsepower of American race cars on typical flat-track raceways; however, they could command respect in a different event, especially one where nimble maneuvering took priority over horsepower.

Soon timed obstacle events were growing in popularity, yet they weren't necessarily growing in scope. The young competitors soon turned their attention to speed and traditional racing and melded the nascent gymkhana into autocross.

Across the globe, Japan was also hitting its economic stride. Unlike the United States there was little land to open up larger tracks and gymkhana's smaller scale appealed to the space-conscious Japanese. The events also dovetailed well with the country's growing small car manufacturing base.

Today Japan is the only country to have a well-developed and distinct gymkhana racing structure with local, regional and national contests. The sport is overseen by the Japan Auto Federation, a body sanctioned by the French FIA.