The Future of Driverless Car Racing 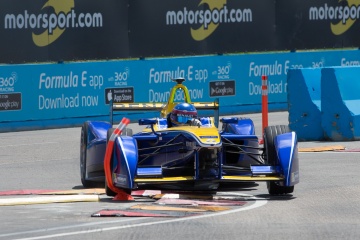 Formula E is already pretty cool with drivers. Imagine how the races would look when the cars are driverless during Roborace!
Jed Leicester/LAT/Formula E via Getty Images

After hearing about the current state of driverless car racing, motorsport fans are probably thinking, "That's pretty cool, but when are we going to see some REAL racing?" Great question. And you'll be glad to hear that the answer is soon.

In November 2015, Formula E, a racing class for electric cars, announced Roborace, an international racing circuit for driverless electric vehicles. The plan is to hold these races before each Formula E event, beginning with the 2016-2017 season. Roborace will feature 10 teams using identical cars, so the competition will actually come down to the different sensors and computer algorithms team engineers create to make the car autonomous. And the best news for racing fans? One of the event's founders promises speeds as high as 186 miles per hour (299.3 kilometers per hour) [source: Davies].

But will anyone watch it? That's the big question raised by many of Roborace's critics. These doubters feel that if you take the human element out of racing, it becomes less interesting and perhaps doesn't even qualify as a sport. It's the strategic miscalculations and the crashes that people tune in to see, so what will happen if computers are fine-tuned to avoid these mistakes? What will racing be without the drivers' emotional celebrations in the winner's circle? There's even some concern that driverless cars will become so good at racing that human drivers will become obsolete.

Not everyone agrees, however. Supporters argue that this type of competition will actually make the sport much more appealing by attracting a new type of fan that didn't really care much for racing before. And as for the human element, Roborace advocates don't see that going away, either. They hope the engineers will take on that role, finally enjoying some of the spotlight after being holed away in a laboratory for much of their careers [source: Fagnan].

In the end, the head of Formula E doesn't see his Roborace as the end of motorsports. Rather, he wants fans and competitors to get excited about innovation — and maybe have a little fun in the process [source: Khorounzhiy].

On March 31, 2012, Google announced a partnership with NASCAR to form Google Racing, a racing division for driverless cars. If that timing isn't suspicious to you, it should be. The next day the Internet search giant announced the whole thing was an April Fool's Day prank [source: Google].

I've been casually following what's going on with driverless cars, but the notion of racing them is a new, and unquestionably awesome, concept to me. While researching this article, I found myself being distracted by YouTube videos of the early DARPA races and other adventures in autonomous racing. Now that I know there's going to be a new driverless racing series, I'm very interested in seeing it. I guess that makes me one of those new fans race promoters hoped to draw to the sport!