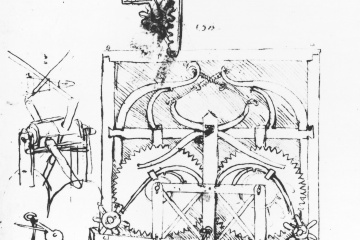 Obviously, driverless cars weren't invented just so we could race them around a track. Sure, that's pretty awesome, but the real reason was more practical. If cars drove themselves, people who rely on others for transportation because of age or disability could have much more independence, not to mention your average commuter, who could have more time to relax. As an added bonus, driverless cars could ease congestion, reduce accidents, lower fuel consumption and even alleviate the demand for parking.

The idea for a driverless car can be traced all the way back to Leonardo da Vinci, who sketched a pre-programmable cart in 1478 (seriously, what didn't that guy think of?). But it wasn't until General Motors' "Futurama" exhibit premiered at the 1939 World's Fair that driverless cars really gained public attention. The exhibit was a scale model of how the world might look in 1960, as envisioned by GM, and prominent on its tiny freeways were cars that drove themselves. Early attempts to actually develop this technology in the 1950s focused on so-called smart highways, which were roads embedded with steel cables that cars could detect and follow [sources: Vanderbilt and Weber].

Today's driverless cars, which navigate roads using sensors and computers to scan and interpret the environment, came out of the 1970s. That's when engineers from Japan's Tsukuba Mechanical Engineering Laboratory successfully programmed a car outfitted with two cameras and an analog computer to follow white road markers at the blazing speed of 18.6 miles per hour (30 kilometers per hour), though a steel rail helped it along [source: Weber]. Over the next couple of decades, however, universities and companies across the world took advantage of improvements in computer technology to create driverless cars that actually performed quite well in real-world road tests.

In 2003 the United States military, under the Defense Advanced Research Projects Agency (DARPA), decided these cars were ready to race. More specifically, they hoped that challenging driverless car researchers to compete against one another would spur innovation in a technology that could potentially have important military applications. Thus the DARPA Grand Challenge was born. With a $1 million prize on the line, teams gathered in the California desert in 2004 to unleash their ultimate autonomous speed machines, and the results were, well, interesting [source: Shipley]. But before we get into that, let's talk about the technology it takes to build a driverless race car.