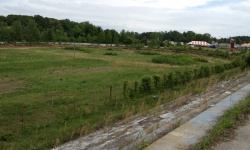 When you think about it, a racetrack only has one purpose: to be driven around as fast as possible. The surrounding structures, like the grandstands, restrooms, pit buildings and concession stands, don't have a lot of other uses either. Unlike an old big-box store, office building or school, when a racetrack is past its useful life, it can be hard to repurpose. Repurposing a site so large is expensive and creates environmental concerns. Sure, you can build on the land, but there will no longer be a track.

That's why when a racetrack is no longer in use, it often sits abandoned. Long after the engines are silent, the crowds are gone, the last beer is drunk and the last hot dog is eaten, the track remains. Amazing feats of speed once happened on these 10 racetracks, but now they're desolate.

One problem with owning a racetrack is that you don't get a lot of use out of it in the winter. (I live close to the New Hampshire Motor Speedway, and let me tell you, no one is plowing the track once the snow falls.) The owners of Twin City Raceway didn't have to deal with too much snow, since the track is in South Carolina, but they did have to deal with cold fans. How did they do it? They wrapped the stands in tin and put woodstoves underneath for warmth. Nothing like watching a race while your buns slowly cook, is there?

Twin City was a quarter-mile (402-meter), high-banked track, like many tracks around the U.S. — but the heated grandstands made it remarkable. Those stands let Twin City host races on Christmas Day when most tracks were silent, giving local residents a handy excuse to get away from bizarre Uncle Al [source: Williamson].

As innovative as heated grandstands were, they weren't enough to keep Twin City open. It closed in 1968, but if you drop by, there's still a lot of the dirt track left [source: Wilson].

If you're in Tulsa, Oklahoma, and want to check out a race, you can head to the Tulsa Raceway, which hosts all types of drag races on its 60-foot (18-meter) wide concrete drag strip. It has seating for 10,000, so you should have plenty of company [source: Tulsa Raceway Park]. If you want to have some privacy and see an abandoned track, head to the Tulsa Speedway.

Originally part of the Tulsa fairgrounds, the Tulsa Speedway was closed due to noise complaints from neighbors. If you decide to visit the Tulsa Speedway, there's plenty of abandoned racetrack accoutrements to explore. The ghostly air of the abandoned track makes the Tulsa Speedway a perfect place to time yourself as you practice outrunning zombies. The grandstands and concession stands are also still intact, though we're pretty sure any food you might find there is well past its expiration date.

Stock car racing grew out of the American South, and there's no bigger racing town than Charlotte, North Carolina. It's home to the NASCAR Hall of Fame and the headquarters of a number of top racing teams. That's why it's so surprising that there's an abandoned racetrack in Charlotte. You'd think that the heart of American car racing would have enough lifeblood to keep all local tracks going, but you'd be wrong.

Let's say you were hanging out in Charlotte in the 1960s and '70s and had a car you wanted to race. You'd head over to the Metrolina Speedway, which was known for having all-comers races. Anything that had an engine and four wheels was legal. Think about that for a minute: You could literally have any car racing against any other kind of car.

In the 1970s, Metrolina was paved and used for some NASCAR-sponsored races (NASCAR legend Dale Earnhardt even drove there), but today it's an abandoned relic in one of the most important racing towns in America.