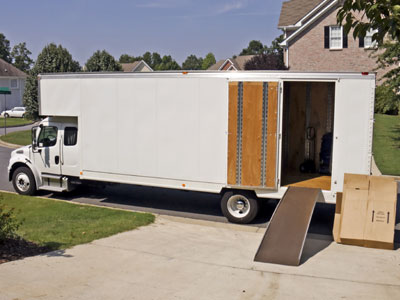 All of your stuff is packed in the moving van. All that's left it to tow your car to your new life. See more truck pictures.
Laura Clay-Ballard/iStockPhoto

­ You finally got that dream job and you can't wait to blow this pop stand. You've kissed your old life goodbye -- told off everyone who's ever annoyed you, delivered a lengthy and tearful farewell address at your neighborhood Laundromat and had your mail forwarded. Everything you own is safely packed away in boxes and the movers have just headed out on their way to your new home halfway across the country. All that's left is to tow your car with your other car. Your significant other's already flown out to your new hometown, so it's up to you to take the wheel and get both of your cars safely to your new place.

Driving with a car in tow is a lot different than driving unfettered. Luckily you realized this early on and had the foresight to practice making turns and backing up in the local high school parking lot for weeks before your big move. You've also installed tow mirrors to give you a better view of the road behind you. You're prepared, but there are a few more things you'll want to take care of, though. Don't worry; it's nothing that a few minutes on the Internet can't fix.

It's a good idea to familiarize yourself with the dimensions of your towing equipment and cargo. Calculate the combined height and width of the lead and towed vehicles (or the trailer, if you've got one) and the gross combination weight rating -- which is the total weight of both vehicles (any trailer you may have, the fuel tanks, the passengers, the whole shebang). This knowledge will help guide you as you go on to explore the different state guidelines that restrict and regulate towing.

Read the next page to familiarize yourself with state towing regulations. Once you're done with that, we'll give you a few hints to make sure you're properly covered by your insurance company to protect yourself in case you need to make a claim. 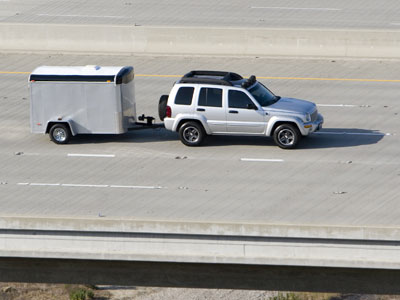 You found the perfect-sized trailer for your tiny car, sure, but did you purchase breakaway brakes for it as well?
Tim McCaig/iStockPhoto

When you're towing a car across the purple mountains majesty and fruited plains of America -- or if you plan on heading toward the Big Apple -- you'd better slow your roll before you take off. In an unusual gesture of federalism, the U.S. government left it to the states to decide what restrictions they'd place on trailer towing.

It may seem a bit piecemeal to have different regulations across different states regarding car towing, but some states take stronger precautions against accidents than others. For example, most states require that the trailer towing your car have breakaway brakes. These are electronic systems triggered in case the car in tow suddenly becomes detached. This can be a thorny situation; one minute you're driving normally, your driverless car's careening wildly in high-speed traffic the next. Breakaway brakes lock the towed vehicle's brakes if it becomes detached, and most systems keep the brakes locked for 15 minutes, which manufacturers hope is enough time for you to realize your car's no longer in tow and to retrieve your wayward auto.

­It's understandable why most states require that a car in tow have this added safety feature attached during transit. There isn't a state in the union that doesn't require breakaway brakes, but some states simply don't specify either way (which could, arguably, make a good case in court if you're caught without them). This discrepancy reveals a common theme: It's better to be safe than sorry. Not having breakaway brakes could put you in a terrible pickle if your car becomes detached, and since most states require them, it's a good idea to err on the side of caution.

You probably could have guessed that most states require safety measures like breakaway brakes, but what about more nuanced distinctions in regulations among the different states? Even before you purchase a trailer for car towing -- especially if you plan on interstate towing -- it's a good idea to get a look at the various state restrictions and requirements. For example, many states specify a maximum trailer height of 14 feet; others, 13 1/2 feet. So, if you're traveling through Georgia with your 14-feet-tall trailer, you may end up with a citation. Ultimately, it may be a better choice to purchase one that meets the maximum restriction for the state with the strictest standards. This holds true not just for height, but for other dimensions and safety devices as well.

You should also familiarize yourself with the varying driving restrictions in different states. The maximum speed for a vehicle with a car in tow is the posted speed limit in most states; in others it's lower and may depend on the towing weight of the trailer. Some states also require different license classes for drivers with vehicles in tow. This may warrant you taking an additional test through your state's department of motor vehicles. You can find links to sites that display the towing laws for all 50 states on the LMI page.

Think you're ready to go? Think again. You're going to want to take a closer look at your auto insurance first. Read about insurance for car towing on the next page. 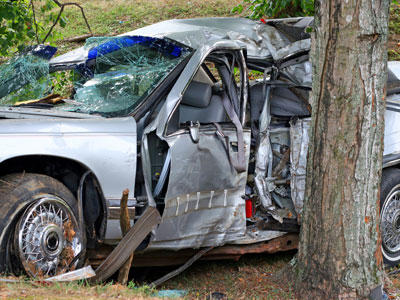 Your towed car got loose. Who's going to pay for this? If you don't have the right insurance, you are!
Frances Twitty/iStockPhoto

The scenario described on the last page about the detached car careening through traffic was grim. Let's say it happens to you. Does your insurance cover damage to your car? Other cars? Other people's medical bills? These are a few questions you're going to want to pose to your insurance agent before you head out on your Great Towing Adventure.

To get to the bottom of this, HowStuffWorks recommends you place a call to your insurance agent before you tow anything at all. Whether you're towing your car, boat or even lawn equipment on a tiny trailer, you want to make sure you're covered in the case of an accident.

­Auto insurance generally extends to towing scenarios, but policies vary by company and by state. While policies are different, there are some rules of thumb when it comes to insurance and towing. Firstly, in the case of an accident where the vehicle in tow causes an accident, say, by sideswiping a car in traffic, you're likely going to have two claims. The first will be a collision claim to repair any damage done to the car you're towing. This claim will come from the collision insurance policy you have on the car you're towing. Don't have collision insurance on the car you're towing? Don't tow it! HowStuffWorks couldn't find a policy where coverage of the lead car extended to the car in tow. You'll have to maintain two policies to cover both cars.

When a car in tow hits another car, another claim will likely be filed. This will be a liability claim made against the lead car's insurance policy by the innocent bystander whose car was hit by your towed car. This claim will usually go against the lead vehicle, since in most cases, hitting another vehicle with a towed car is an act of negligence or bad driving on the part of the lead car's driver.

Clearly, it would be a real nightmare to damage another car with the car you're towing. You would likely have two claims to file, which could raise your monthly insurance premiums. There are two lessons to be learned here. First, never tow a car without ensuring your have the proper insurance coverage. Second, it's a good policy to practice towing your car. Get the various maneuvers down, and don't assume you're a towing pro. You may be unpleasantly surprised to find that you're totally inept with a car in tow.

Again, coverage for towing cars varies by company and state. Don't take our word for it: Contact your insurance agent before towing anything. Once you do, and you've got a little practice under your belt, you'll be ready to set out for that new life across the country with confidence.