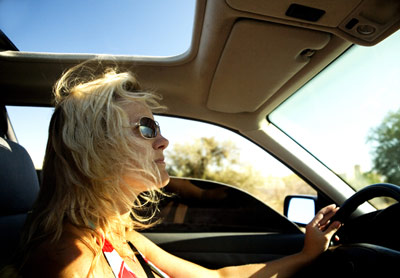 Anna Pena/Getty Images
A sunroof is a great option, but did you know that it adds to your vehicle's base curb weight?

A young man sits in his late model compact car, impatiently waiting for the traffic light at a busy ­intersection to turn green. But this is no ordinary hatchback. In fact, the driver spends nearly all of his free time -- and a significant portion of his ­paycheck -- upgrading components and pulling every little bit of power he can from within the high-revving engine. Sure, some items are strictly for appearance, like those dark-tinted windows and custom seats, but the majority of his efforts have gone into making this car fast. Engine, intake and exhaust modifications, and even some aerodynamic improvements, have been made. As soon as the light turns green, the driver is going to prove to everyone at this intersection that all of his hard work has been well worth it. He's confident that his car can beat nearly anything on the road.

Just seconds before it's go time, a motorcycle rolls up to the line beside the would-be street racer. A quick nod from the helmeted rider lets the driver know that he accepts the challenge of an impromptu drag race. Engines rev up as both machines anticipate the green light. A moment later, it's green -- the race is on.

The hatchback driver gives it his best, launching from the line in perfect time with the light. A short chirp from the front tires as he switches between gears lets him know that he's really hard on the throttle. But his efforts are to no avail. The motorcycle rider has left him behind -- way behind. From the moment the light changed, the motorcycle was off like a shot. The car, even with all of its go-fast modifications, never really had a chance against the nimble bike.

So why did the over-confident car driver get left in the dust? After all, the motorcycle has less than half the amount of horsepower of the car, right? Neither driver made a mistake -- no delay at the light and no missed gears -- yet when the light turned green, the bike left the car behind as if it was standing still. Why?

The motorcycle in this example has just emphasized an advantage that all motorcycles hold over passenger cars. Shift to the next page to find out why the high-powered hatchback lagged behind.

­The answer is simple, and you probably had it figured out before you even looke­d at this page: weight. The car engine, as powerful as it is, has a lot more weight to move than the smaller, less powerful motorcycle engine. Of course, there are other forces at play here, including wind resistance and rolling resistance, but let's concentrate on the weight portion of this situation -- specifically the weight of the car.

Base weight is a term that you may have heard if you've ever shopped for a new car, or if you like to read the car reviews in any of the popular automotive magazines. The base weight of a vehicle is, in simplest terms, how much your vehicle weighs. It may sound like a pretty straightforward measurement, and for the most part, it is. But there are a few fine points that should be understood about the way the measurement is taken. Automobile manufacturers determine the base weight of a vehicle by weighing it with no cargo or passengers onboard. The measurement also includes the weight of a full tank of fuel and other fluids like engine oil, coolant, brake fluid, transmission fluid and any other fluid that's considered essential for vehicle operation.

Well, that's it, right? Not much more to say about base weight? Wrong. You may be surprised to hear that the actual base weight of a vehicle can be much higher than the advertised curb weight. How is that possible?

Wait just a minute -- a sunroof adds weight? You may have thought that because the sunroof is basically a hole in the top of your vehicle that the weight would actually be reduced. Unfortunately, the sunroof glass, the metal track system that it travels back and forth on and the extra switches and wiring weigh more than the small piece of metal and insulation material that they're replacing. Did you want the multi-speaker sound system with a trunk-mounted CD changer? How about the optional floor mats? It may just be a few pounds here and there, but it adds up quickly.

Returning to our example of the compact car versus the motorcycle, the most significant disadvantage the car suffered was its horsepower-to-weight ratio. Yes, the car has much more horsepower than the motorcycle, actually more than twice the amount available at the wheels; however, the car weighs four or five times the amount of the bike. In ­this case, it should have been easy to determine the winner even before the light turned green. The deciding factor wasn't driver ability -- it was weight.

Depen­ding on the make and model year of your car or truck, you may be able to find your vehicle's curb weight on the following chart.