by Cristen Conger
Prev NEXT 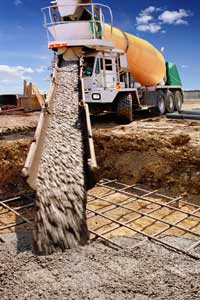 Concrete is one of the most essential building materials in the world. Look around you, and you're bound to spot something made of concrete. The seemingly ubiquitous compound is a mixture of water, cement and additives such as sand and gravel. About 75 percent of the concrete used for construction projects is ready-made [source: Portland Cement Association]. Ready-made concrete is initially mixed at a concrete pl­ant, then transported to the site via truck.

Concrete trucks are easy to recognize with their signature drum-shaped attachments. Those rotating drums keep the concrete mixture from hardening during the trip. The truck drivers control the speed of the drum rotation, adjusting it according to how the concrete will be used [source: Clark, Dropkin and Kaplan]. If you've ever picked up a single concrete block, you can imagine the immense weight of a truckload of the stuff. Indeed, a fully loaded concrete truck may weigh up to 60,000 pounds (27,215 kilograms) [source: Clark, Dropkin and Kaplan]. That enormous load makes it one of the largest allowable on many state highways.

Everyone knows that concrete is heavy. And the more concrete you’re towing, the heavier the load. That same principle applies to the next object we’ll look at. Maybe apple cores, coffee grounds and candy wrappers don’t weigh too much individually, but when they’re compacted together, it’s a back-breaking load.­