Browse the article How Brakes Work 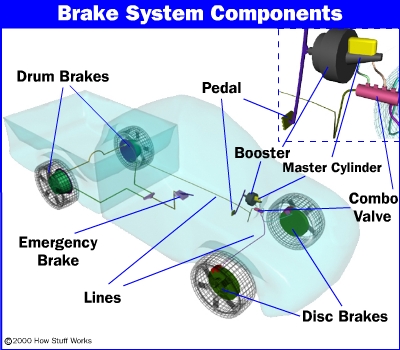 The layout of a typical brake system. See more pictures of brakes.

We all know that pushing down on the brake pedal slows a car to a stop. But how does this happen? How does your car transmit the force from your leg to its wheels? How does it multiply the force so that it is enough to stop something as big as a car?

When you depress your brake pedal, your car transmits the force from your foot to its brakes through a fluid. Since the actual brakes require a much greater force than you could apply with your leg, your car must also multiply the force of your foot. It does this in two ways:

We'll discuss leverage and hydraulics in the next section.

The pedal is designed in such a way that it can multiply the force from your leg several times before any force is even transmitted to the brake fluid.

The basic idea behind any hydraulic system is very simple: Force applied at one point is transmitted to another point using an incompressible fluid, almost always an oil of some sort. Most brake systems also multiply the force in the process. Here you can see the simplest possible hydraulic system:

In the figure above, two pistons (shown in red) are fit into two glass cylinders filled with oil (shown in light blue) and connected to one another with an oil-filled pipe. If you apply a downward force to one piston (the left one, in this drawing), then the force is transmitted to the second piston through the oil in the pipe. Since oil is incompressible, the efficiency is very good -- almost all of the applied force appears at the second piston. The great thing about hydraulic systems is that the pipe connecting the two cylinders can be any length and shape, allowing it to snake through all sorts of things separating the two pistons. The pipe can also fork, so that one master cylinder can drive more than one slave cylinder if desired, as shown in here:

The other neat thing about a hydraulic system is that it makes force multiplication (or division) fairly easy. If you have read How a Block and Tackle Works or How Gear Ratios Work, then you know that trading force for distance is very common in mechanical systems. In a hydraulic system, all you have to do is change the size of one piston and cylinder relative to the other, as shown here:

Next, we'll look at the role that friction plays in brake systems.

­Friction is a measure of how hard it is to slide one object over another. Take a look at the figure below. Both of the blocks are made from the same material, but one is heavier. I think we all know which one will be harder for the bulldozer to push.

To understand why this is, let's take a close look at one of the blocks and the table:

Because friction exists at the microscopic level, the amount of force it takes to move a given block is proportional to that block's weight.

Even though the blocks look smooth to the naked eye, they are actually quite rough at the microscopic level. When you set the block down on the table, the little peaks and valleys get squished together, and some of them may actually weld together. The weight of the heavier block causes it to squish together more, so it is even harder to slide.

So the amount of force it takes to move a given block is proportional to that block's weight. The more weight, the more force required. This concept applies for devices like brakes and clutches, where a pad is pressed against a spinning disc. The more force that presses on the pad, the greater the stopping force.

For a car tire, the coefficient of dynamic friction is much less than the coefficient of static friction. The car tire provides the greatest traction when the contact patch is not sliding relative to the road. When it is sliding (like during a skid or a burnout), traction is greatly reduced.

Before we get into all the parts of an actual car brake system, let's look at a simplified system:

You can also see that the diameter of the brake cylinder is three times the diameter of the pedal cylinder. This further multiplies the force by nine. All together, this system increases the force of your foot by a factor of 36. If you put 10 pounds of force on the pedal, 360 pounds (162 kg) will be generated at the wheel squeezing the brake pads.

There are a couple of problems with this simple system. What if we have a leak? If it is a slow leak, eventually there will not be enough fluid left to fill the brake cylinder, and the brakes will not function. If it is a major leak, then the first time you apply the brakes all of the fluid will squirt out the leak and you will have complete brake failure.

The master cylinder on modern cars is designed to deal with these potential failures. Be sure to check out the article on How Master Cylinders and Combination Valves Work, and the rest of the articles in the brake series (see the links on the next page), to learn more.