How to Test Vehicle Stopping Time 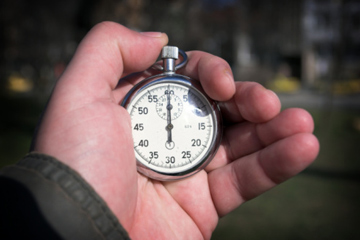 Stopwatches and measuring tape are no longer necessary.
Hemera/Thinkstock

When we look at buying a car, we usually check out the gas mileage, the odometer, the standard equipment and, of course, the price. If we're drooling over a performance car, we read up on speed and power characteristics as well -- 0 to 60 miles per hour (96.6 kilometers per hour) in so-many seconds with this-many brake horsepower and that-much torque. We rarely spare a thought for braking systems, because we presume (correctly, as it turns out) that the law requires manufacturers to engineer vehicles to stop within a certain safe distance.

The National Highway Traffic Safety Administration (NHTSA) provides stopping distance requirements and tests for all vehicles. Assessments for light vehicles comprise a cold effectiveness test, a high-speed test, a fade and recovery test and experiments to evaluate stopping distance given the partial failure of a subsystem. Hydraulically braked medium and heavy vehicles differ from light vehicles in that their tests include scenarios involving completely failed systems.

However, braking amounts to more than a simple matter of pushing a pedal. Drivers must consider the feel of the brakes, their balance, whether they work differently warm and cold, how effectively they perform in wet versus dry conditions and whether they fade over time.

Most of us have heard the rules of thumb about multiplying our speed by a certain number of car lengths, or of maintaining a space cushion of 2 to 3 seconds from the car in front of ours. Nothing can substitute, however, for really getting to know the distinctive braking characteristics of your own vehicle, from the grip in the tires to the thump and pulse of the anti-lock braking system (ABS) kicking in.

Ultimately, nothing compares to getting the car up to speed and then slamming on the brakes. In this article, we'll show you how the pros test their brakes and how you can apply their methods to your own car or truck.

Brake testing methodology has evolved quite a bit over the years. The old days of start lines and measuring tape long ago gave way to the fifth wheel, which later lost ground to pavement-reading laser systems. Today, a mix of accelerometers and global positioning systems dominate testing, but even the cheapest of these instruments costs thousands of dollars, so the budget-conscious tester will want to either purchase one used or utilize a start-line-and-measuring-wheel approach instead.

Braking characteristics fluctuate over time due to a combination of heating characteristics, tire traction and brake fade, so experts suggest doing multiple tests close together. "Motor Week," for example, performs six straight-line, dry-track tests in quick succession, tossing the best and worst results (if the data spread exceeds tolerances) and averaging the other four. To gather their data, they employ a windshield-mounted gadget with built-in accelerometers and dynamometers that measure braking force, speed, distance and time, along with g-force and friction characteristics. According to host John Davis, a competent car's braking performance will not vary much over four to six stops.

Ideally, you should also put your brakes to the test under both wet and dry conditions. "Consumer Reports" performs some of its checks with one set of wheels on a wet track and the other set on a dry track, to test ABS versus brake performance. Wet track testing can be tricky, however, because consistent wet conditions require a good irrigation system.

Brake testing encompasses nuances beyond just stopping time and distance, however. "If it pulls to one side or the other, then the braking is improperly balanced," says Davis. "There shouldn't be any corrective steering needed, and the back end should not swing out."

Pay attention to the car's nosedive, too, he adds. Note the feel of the brake pedal, which should be firm but not hard, providing the driver with an instinctive feel for what the brakes are doing. The pedal and brakes should engage right as you step on them and furnish good feedback as you continue to push down.

Follow these tips and you'll soon have brake testing down to a science. Safe motoring!

For more information about vehicle stopping time and other related topics, follow the links on the next page.

Motor Week considers 60 miles per hour (96.6 kilometers per hour) to zero in 130 feet (39.6 meters) the break point between good and bad braking, while high performance or very lightweight vehicles often stop in less than 120 feet (36.6 meters).

What do the brake warning lights mean in my car?
Could anti-lock brakes detect a flat?
What should I do when my brakes lock?