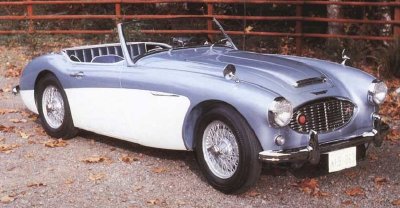 A two-inch wheelbase stretch made room for a tiny seat in the Austin Healey 100 Six.

BMC saw the Austin-Healey as an integral part of their lineup, so when the firm’s engine strategy changed, it was clear that the big sports car would too. It was thus no surprise that the 100/4 became the Austin-Healey 100 Six in 1956. The old A90 four was considered obsolete. In its place was a new straight six of about the same size. But there was much more to the new model than just two extra cylinders and more low-rpm torque, for the Healey family, at BMC’s behest, took the opportunity to freshen up the car end to end.

U.S. market feedback suggested buyers wanted more cabin space than the 100/4 had, so the redesign included a two-inch wheelbase stretch and the repositioning of some components in the tail to make room for the addition of tiny “ + 2” rear bucket seats. These may have been virtually useless for anything except parcels, but they met the demands of the sales force. Styling for the Austin-Healey 100 Six was much the same aside from a new oval grille, fixed windscreen, choice of wire-spoke or steel-disc wheels, and a bulged hood with a small functional air intake at the front.

The big difference, of course, was the new six-cylinder engine. This was BMC’s corporate C-Series large-car unit, which had some design similarities -- but few common components -- with the B-Series four used in the MGA sports car. A big, heavy 2.64-liter cast-iron job with overhead valvegear, it was, according to the claimed figures, more powerful than the old big four (102 vs. 90 horsepower). A 4-speed gearbox was standard, as on the ousted BN2, but on the Austin-Healey 100 Six, designated BN4, overdrive was an optional extra.

Alas, the Austin-Healey 100 Six was a disappointment in its first year or so of production. Considerably heavier than the 100/4 (2435 pounds vs. 2150), it not only felt but was less lively. It didn’t seem to handle as well either, and somehow came off as less of a sports car than its predecessors.

But autumn 1957 brought two important developments. First came a major strategic move as BMC decided to centralize assembly of all its sports cars; this meant that Austin-Healey production moved 50 miles south, from Longbridge to the MG factory at Abingdon. At about the same time (the phase-in point was neither tidy nor exact) there appeared a much-improved engine, with a revised cylinder head and more efficient manifolding that boosted peak power to 117 bhp and afforded a more sporting torque delivery. The difference was perhaps more marked than the figures suggest, for road tests pointed to an 8-mph gain in top speed and acceleration restored to something like BN2 levels.

Then, the two-seater returned as an addition to the line. Designated BN6, it reflected the sort of “second thoughts” backpedalling that would increasingly come to characterize BMC marketing. Moreover, BN4 assembly was suspended for a time, then resumed once existing inventory was cleared (most in the U.S., presumably).

Still, these were exciting years for Austin-Healey, especially once the little “frogeye” Sprite arrived in 1958 to take the marque into high-volume territory for the first time. With two different models in the showrooms, enthusiasts began to refer to the 100 Six (and its successors) as the “Big Healey.”

By that point, the disappointing BN4 had been forgotten, and the reputation and sales of the latest six-cylinder Healeys continued to mount. As in 1953, these were sports cars with great character and style that not only performed well but made all the right noises. They would be a tough act to follow, but BMC thought it could do just that. It did. The Austin-Healey 3000 was at hand.

To learn more about Austin-Healeys and other sports cars, see: