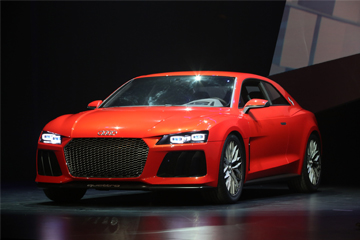 To paraphrase Dr. Evil: Is it so hard to get a car with frickin' laser beams for headlights?

Turns out it's not. At the 2014 International Consumer Electronic show in Las Vegas, Audi showed they had done just that. When they introduced the Audi Sport quattro laserlight concept, the car had lasers for headlights. That's right: Lasers. For. Headlights.

Lasers are pretty cool and exciting. Headlights, on the other hand, are not. You probably don't even think about car headlights unless you're playing padiddle (learn how to play here) or explaining to a cop that you're on your way to the auto parts store to get a replacement bulb and hoping he buys it so you don't get a ticket.

Headlights may not occupy a lot of your headspace, but advances in headlights, like the Audi Sport quattro laserlight concept, save money and lives. According to the Highway Loss Data Institute (HLDI), cars with adaptive headlights, which are headlights that turn with the steering wheel, illuminating curves in the road ahead, have 10 percent fewer property damage liability claims to their insurance. Further, cars with adaptive headlights have lower injury rates in single car crashes than do cars with conventional headlights. Brighter headlights help drivers see objects on dark roads sooner, even if they don't swivel with the car's steering wheel [sources: HLDI Crash; HLDI Adaptive].

So, to borrow another line from Dr. Evil, the Audi Sport quattro laserlight concept won't help you put British secret agents in an easily escapable situation while you assume that everything will go according to plan, but it will provide enough light for drivers to see twice as far as they could with LED headlights. Add to that the fact that the car behind those headlights has a 700 horsepower gas-electric powertrain and sweet styling, and suddenly laser headlights are just one of the cool things the Audi Sport quattro laserlight has going for it.

In the following pages, we'll learn why Audi is synonymous with headlights, why the Sport quattro laserlight concept has a strong off-road history and just how far a car with frickin' laser beams for headlights can let you see. 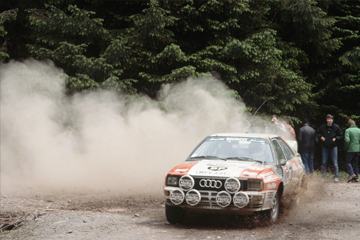 The Audi Sport quattro laserlight concept's styling builds on the heritage of Audi rally cars from the 1980s.
© David Reed/Corbis

The styling of the Audi Sport quattro laserlight concept is based on the classic 1984 Audi Sport quattro S1. The original Sport quattro was a rally racing legend, a squared-off coupe with all-wheel drive that let it grip the dirt roads of the rally circuit, winning races and turning bystanders into lifelong Audi fans.

Rally racing is a type of car race that takes the stock car aspect of NASCAR, the complicated courses of F1 and the pressure of endurance racing and combines them with all types of road and weather conditions. Rally car races don't get called off because of rain. They get more exciting.

In a rally, production cars, similar to ones you could waltz into any dealership and buy, are driven as fast as possible over real roads. In each car is a driver who drives the car (duh) and a co-driver who tells the driver what's coming. A co-driver is necessary because, in rally racing, drivers aren't allowed to practice the course ahead of the race. Instead, the driver pushes the car as fast as he or she can, with just a second or two to react after the co-driver calls out the direction and degree of turn coming up ahead. Rally races take place over several days and all types of roads — paved, dirt, gravel and even snow and ice.

Because rally cars have to be street legal, they're accessible for most fans to purchase. That makes rally racing a great place for car companies to build their reputations and gain new customers. Audi has an extensive rally racing history based off of its quattro all-wheel drive system and models of the same name. In 1981, Audi debuted its first quattro car in the Monte Carlo rally. That car was driven by Michèle Mouton, who, that year, became the first woman to win a World Championship rally. According to Audi, "A few nostalgic machos deemed it 'only possible because of quattro,' as if to say that 'even a woman' could win with this technical concept; many others were naturally more impressed by this new, 'modern' situation" [source: Audi Rallying].

Because rally racing takes place in all types of light and weather conditions, as well as different road conditions, visibility, power and road grip are key. The Audi Sport quattro laserlight concept builds on the company's heritage with sleek engineering and technology designed to take Audi's rally racing legacy to the next level. 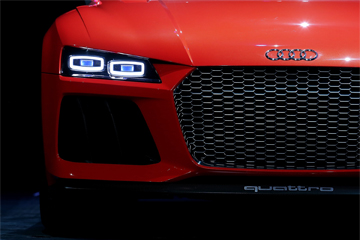 The Audi Sport quattro laserlight concept car sits on stage during a keynote address by Rupert Stadler, Chairman of the Board of Management of Audi AG, at the 2014 International CES in Las Vegas, Nevada.
Justin Sullivan/Getty Images

While the original quattro only had a gasoline-powered engine, the Sport quattro laserlight has a plug-in hybrid powertrain. It's powered by a four-liter V-8 engine and a 110 kW electric motor. Together, the two combine for 700 horsepower and can get up to 90 miles per gallon (38 kilometers per liter). For comparison's sake, consider the Toyota Prius Plug-In, a mainstream plug-in hybrid. It has a total of 232 horsepower and gets 50 miles per gallon (21 kilometers per liter) [source: Toyota].

To wring every possible mile out of electric driving, and to make the most efficient use of gas when the engine does need to fire up, the Sport quattro laserlight has a lightweight body. Cast aluminum and steel frame the passenger compartment, while the roof, hood and rear hatch are reinforced carbon fiber. The use of high-tech, light-weight materials gives the Sport quattro laserlight a trim, unladen weight of 4,078.55 pounds (1,849.99 kilograms).

Of course, with the word "light" in the car's name, specifically "laserlight," there's more to the car than just how much it weighs. As revolutionary as the Audi Sport quattro laserlight concept's powertrain and performance components are, its headlights are even farther ahead of the pack. 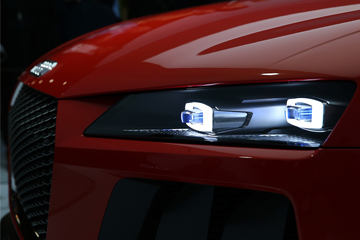 When most people talk about "light" in conjunction with the laserlight, they aren't talking about its weight. The laserlight's headlights are groundbreaking. Made from a combination of matrix LED and laser technologies, the headlights cast enough light to allow the driver to see through five football fields' worth of darkness.

To understand how revolutionary this is, you need to understand what LEDs and lasers are. LEDs are light emitting diodes. They're essentially tiny light bulbs, but they take a really long time to burn out, they don't get hot and they slide right into electrical circuits. Their flexibility makes LEDs ideal for electronics, which is why they're so prominent in ultra-thin TVs and other home electronics. LEDs have been used in car headlights for a while, but what makes the LEDs in the Sport quattro laserlight concept so revolutionary is that they illuminate themselves based on the road ahead. Using a Matrix LED system, a computer system in the car "reads" the road ahead and lights up certain LEDs in the headlights depending on where the driver needs to see. So, the Audi Matrix LED system can allow the driver to see down into dips and around corners — areas that would otherwise remain dark with conventional headlights [source: KBB].

Lasers emit light via radiation. In fact, LASER stands for "light amplification by stimulated emission of radiation" (and now you have a fun fact to share at your next dinner party). Further, laser light is very concentrated. Lighting a light bulb is like spilling a bucket of water: The light goes in all directions, following the path of least resistance. Laser light, by contrast, is more like shooting water out of a hose. The light goes only in the direction you point it.

The laser headlights in the Sport quattro laserlight aren't just for electronics shows either. The technology will be used on the Audi R-18 e-Tron quattro prototype race car. So while we're a bit far from having cars with laser beams that will allow you to literally slice your way through traffic, at least the laser LED matrix headlights on the Audi Sport quattro laserlight concept will let you see how long that line of traffic snakes ahead of you.

It seems a little odd for an automaker to hang its hat on headlight design, but it's been working for Audi. The car company was the first to use LED headlights — in a sexy, cat-eye shape, no less — across much of its model lineup. And while the headlights on the laserlight concept may seem like overkill, when it comes to driving, being able to see hazards as early as possible is what keeps us safe, and what makes the laserlight's headlamps so revolutionary.