How the Audi Nanuk Quattro Works 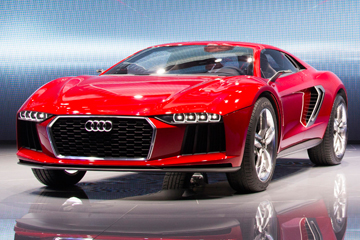 Before Audi became known for its supercars and luxury cars, it was just a little automaker that made quirky German boxes that happened to have a really awesome all-wheel-drive system known as Quattro. Volkswagen scooped up Audi and saved it, then Volkswagen narrowly avoided its own financial collapse, and a couple of decades later, we have stunners like the Audi R8. Not a bad turnaround, all things considered. But it looks like Audi's itching to show its cars still have some of the old spirit, and the new technology to make it better than ever before. The Audi Nanuk Quattro was unveiled on Audi's home turf, at the Frankfurt Motor Show in September of 2013. It was a surprise reveal -- most journalists and industry insiders were not expecting an as-yet-unheard-of Audi, especially not one that looks like Audi's R8 supercar mated with an Audi rally car from the 1980s. So the Nanuk Quattro, sitting there on the showroom floor, shiny and red, hunkered down over its huge wheels, generated a lot of attention. Even though it turns out that many of the show attendees had seen the car before, albeit in a different form.

The Nanuk Quattro is a concept car, which means that its chances of actually making it to production -- that is, being built and sold -- are rather slim. To wit, the Nanuk Quattro is chock full of features that showcase Audi's ability to design a really desirable car (or in this case, partner with a company that can). Showing the car at Frankfurt got Audi a lot of attention, even if it's not a car that would be likely to sell in huge numbers. It's an Audi coupe/SUV that's been dubbed a crossover for a lack of a better way to explain it -- even though it would trounce all other vehicles we call crossovers. It'll get your blood churning, and if it ever does make it to the Audi dealership lots, it'll probably be marked at eye-popping Lamborghini prices. So why bother to build and show the Nanuk Quattro at all? It drew a huge crowd to Audi's show floor, but that alone doesn't justify the investment. Most concept cars have interesting stories, and the Nanuk Quattro is no exception.

The Space Frame and Beyond 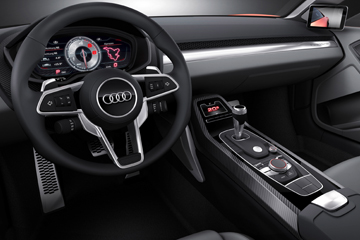 The Audi Nanuk Quattro's interior is an attempt at minimalism -- it's simultaneously rugged and sophisticated.
(Courtesy of Audi AG)

The Audi Nanuk Quattro is an all-wheel-drive turbo-diesel supercar, but it's not just a street-legal race car like most cars that get the "supercar" designation. The Nanuk is, in theory, a crossover (yep, a crossover supercar) so its off-road and athletic abilities are amplified ... to the extent that Audi claims the Nanuk Quattro can handle any terrain. It's hard to picture this gleaming Audi coupe actually straying off the pavement -- even though Audi's earned its street cred when it comes to rally racing, the Nanuk Quattro is shiny, new, and so far, one of a kind. Audi's proprietary Quattro all-wheel-drive system has been modified a bit for the Nanuk. In case the Nanuk Quattro ever makes it off-road, it'll be helped along by integral steering, a system in which the front and rear wheels can turn up to nine degrees in different directions to help the car maneuver at low speeds. At high speeds, the wheels turn to improve stability.

The car also features an updated version of Audi's adjustable air ride suspension that can raise the car 1.6 inches (4.06 centimeters) or lower it 1.2 inches (3.05 centimeters). The driver can adjust the car's height whenever the urge appears, but the Nanuk Quattro also monitors its road clearance and will make adjustments as the terrain requires it. It can make adjustments on-the-fly by measuring the distance from the frame to the road, and it can also use the navigation system to predict clearance needs based on the planned route. The Nanuk Quattro wears beefy 22-inch (55.88-centimeter) wheels over carbon-ceramic brakes that can withstand very high temperatures.

The Audi's diesel drivetrain is an all-new, twin-turbo, 5-liter, V-10 setup. Though Audi and its parent company, Volkswagen, have used a lot of turbo-diesel engines in the past, the twin-turbo setup achieves the desired effect of providing extra boost and keeping fuel consumption relatively low -- a reported 30 miles per gallon (12.75 kilometers per liter). The Nanuk has 544 horsepower and is said to achieve 0 to 62 miles per hour (100 kilometers per hour) in just 3.8 seconds, and it has a top speed of 190 miles per hour (305.8 kilometers per hour). The engine is a longitudinal-mount setup (another Audi tradition), and the transmission is a seven-speed S tronic.

Audi's lightweight aluminum space frame is the basis for the Nanuk Quattro, and it's covered with body panels that are a blend of polymer (for efficiency) and carbon fiber (for strength). The side blades are a styling cue reminiscent of Audi's R8, and they aren't just decorative. They actually feed air to the engine to keep the twin turbos happy. Other elements recall the R8, too, such as the front storage area, the aquarium-like engine compartment accessible via the rear hatch, and the LED headlights.

The interior is an attempt at minimalism -- information is condensed on a floating instrument panel that replaces the need for traditional gauges. All the necessary controls are found either in the center console or on the steering wheel. The cabin, gray leather, carbon fiber and cool aluminum, is simultaneously rugged and sophisticated. The A-pillars display the rear view from the digital cameras, which is also shown in a center display that replaces the physical rear view mirror.

Even though the Nanuk Quattro is new to Audi, the car has been seen before. It's still new, really, but it looked a little different and wore different badges. Italdesign Giugiaro designed the car, based largely on the Guigiaro Parcour concept car that was shown early in 2013. This is how most of the Nanuk Quattro's interesting backstory comes into play.

From Urban Obstacles to Polar Bears 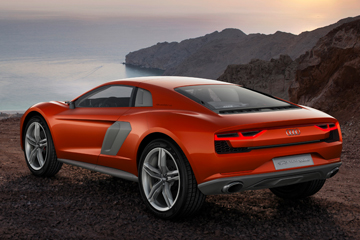 ... or, how the Parcour concept became the Nanuk Quattro concept.

Even though both cars are really Italian in design, the Parcour was named after the French athletic discipline parkour, in which practitioners train to use everyday landscapes as obstacle courses. Nanuk is the Inuit word for polar bear. These monikers alone are enough to show the automakers' difference in perspectives between the two concepts, despite their shared DNA. So how did a German car with a French name end up being born in Italy? Italdesign Giugiaro is an Italian coachbuilder that often collaborates with auto manufacturers when they need to come up with something really spectacular, and sometimes, like in this case, they come up with projects of their own. In spring of 2013, Italdesign Giugiaro released the Parcour, a concept car with a space frame derived from Audi and Lamborghini, a one-of-a-kind crossover coupe-like body and a Lamborghini Gallardo powerplant that has performance specs similar to that of the Nanuk Quattro's twin-turbo V-10. The Parcour previously bore Lamborghini branding when it was debuted at the Geneva auto show in March of 2013, but when the car failed to get the desired attention, it was decided that the concept might fare better as an Audi since it better fits that brand's persona. It's rumored that Ferdinand Piëch, the VW Group chairman, ordered the Parcour team to get the car in front of a new set of eyes. Many an auto journalist has remarked on the visual and mechanical similarities between the Parcour and the Nanuk Quattro, even though the Nanuk Quattro has been softened around the edges a bit to look and feel more like an Audi.

If this all sounds a little incestuous, it is, and it's just part of how concept cars work. Volkswagen, the parent company of Audi and Lamborghini, acquired a majority stake in Italdesign Giugiaro in 2010, and it's quite common for the VW Group brands to share elements, especially new parts and technologies that are all-new and exclusive, very expensive, or represent a significant investment in research and manufacturing. (The aforementioned Audi/Lamborghini space frame is one example; however, there are countless others -- a practice that's common across the entire auto industry.) It's also quite unlikely the Parcour will ever be built, even though it's not cheap to design and build a one-off car that will only be shown and not sold. In light of that knowledge, it's not all that surprising that the blood, sweat and tears that went into the Parcour concept would take a new form and perhaps have a second shot at generating enough warm feelings to get the go-ahead on production. In other words, the Nanuk Quattro is somewhat more likely to be built than the Parcour, and the top people at the VW Group felt strongly enough about the Parcour design to give it another chance.

The Nanuk Quattro was a surprise at Frankfurt -- and actual surprise debuts at auto shows are few and far between. The Internet tends to ensure everything leaks ahead of time. Audi had only a few months to morph the Parcour into the Nanuk Quattro, so the tight timeframe might have played a role in its secrecy. Also, it seems like Audi made an effort to keep it under wraps, as compared to all the concepts that are deliberately "leaked" ahead of time by the auto manufacturers themselves. Not just at the Frankfurt auto show, either; that's par for the entire auto show circuit. If the Nanuk Quattro gets the go-ahead for production, it might not look exactly like the car we see here. It's very common for concepts to get toned down a bit when they're eventually built, for many reasons such as parts availability, safety compliance, and making sure the finished product comes in at a price that enough people will be willing to pay. A finished Nanuk Quattro wouldn't be a cheap car, not with custom Italian design, a Lamborghini-worthy engine and Audi's off-road expertise. But then again, Audi's 1980s Quattros were rather pricey, too, especially for the era. And they weren't even pretty.

The only Audi I've ever owned was so ugly that my mom was embarrassed to be seen in it, even in a town where she knew no one. It was capable, though, and it was fun. And I've driven quite a few high-powered, high-priced Audis since then, and I'm glad Audi does well now by making nice cars, but I still long for my decrepit little beast of a 4000 Quattro. It's for nostalgia's sake, I think, that I hope the Nanuk Quattro makes it to production, even if for all its versatility, it's totally impractical. It's hard to figure out who its customer would be. Are there that many people who wanted a rally car 30 years ago and have since struck it rich? Would the Nanuk Quattro convert people who'd just planned to buy a straightforward supercar? Or is Audi just showing off? It'll be interesting to see where the Nanuk Quattro goes, if anywhere, because even the most ill-fated of concept cars always show a spark of the automaker's imagination.