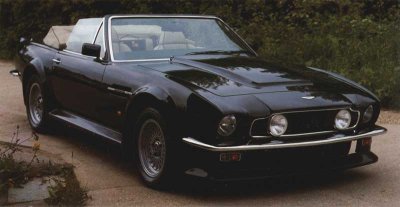 The Aston Martin Volante convertible arrived a year behind the familiar 2+2 coupe.

Just two years after introduction, the Aston Martin DB5 stepped aside for the larger, plusher Aston Martin DB6. Inevitably, the new model was less sporting than its predecessors, if undeniably more practical and still quite potent.

Bowing in late 1965, the DB6 retained Aston’s then-seven-year-old basic chassis design, but with a 3.75-inch longer wheelbase and a relocated rear axle (as usual, by Salisbury). The platform stretch was given over entirely to additional rear seat space. Running gear and suspension were virtual DB5 carryovers, but all drivetrain combinations — 282- and 325-horsepower engines with either ZF manual or Borg-Warner automatic transmission — now cost the same, and “Powr-Lok” limited-slip differential (first used by Aston on the DB4GT) and chrome wire wheels were standard. Announced shortly after the car itself was first-time availability of power steering, a welcome option.

From the front, the DB6 looked much like the DB5, but was quite a departure from the cowl back, if still recognizably Aston. The designers aimed to provide more passenger space, especially in the small “ + 2” rear, and improve aerodynamic stability. Accordingly, the DB6 windshield was higher and more vertical than the DB5’s so the roofline could be raised for increased headroom. The familiar coupe remained a fastback style, but rear quarter windows now swept up instead of down, and the tapered tail of old gave way to a modern, abruptly chopped Kamm-style treatment much like that of the Ferrari 250 Berlinetta Lusso or 275 GTB.

Other recognition points included the return of front-door quarter windows, an oil-cooler air scoop low on the nose, and quarter-bumpers at each comer. Inside were the usual dazzling — and rather haphazardly placed — instruments, sweet-smelling leather upholstery, and top-quality British carpeting.

Though overall length was up two inches, the DB6 weighed about the same as the DB5 even though Aston now abandoned Touring’s patented Superleggera construction. Henceforth, all Astons would have conventional bodies, with aluminum skins and steel floor and inner panels.

The DB6 was apparently slipperier than the DB5, for top speed was up to 148-150 mph in 325-bhp Vantage guise, making it the equal of the more charismatic Ferraris and Maseratis of these years, at least for all-out speed. In fast touring, the British car was still somewhat “trucky” compared with its Latin rivals — more work in spirited driving, though easier to manage than previous Astons.

Per recent practice, a new Volante convertible arrived about a year behind the DB6 coupe. Unlike the “interim” Volante built on the DB5 chassis with a DB6-style rear end, this one had the longer wheelbase and a new power-operated top mechanism. Both body styles then continued with virtually no appearance changes through the end of the series in 1970.

Aston’s next generation, the DBS, had been on the scene three years by then, but the DB6 had one last hurrah beginning in the autumn of 1969. That’s when an updated Mark II version appeared with flared wheelarches to accommodate fatter DBS-type wheels and tires. At the same time, AE-Brico fuel injection arrived as a new option, but it was a very unreliable system and found few takers. Almost all DB6s so equipped have since been fitted with carburetors.

Incidentally, the Radford works again turned out a handful of DB6 “Shooting Brake” (wagon) conversions. These closely resembled the dozen DB5-based examples, but only half as many were built, just six in all.

With the end of DB6 production in November 1970 came the end of the great line begun with the DB2 in 1950. The torch had already passed to a more modern Aston, a design that’s with us yet. For that story, read on.