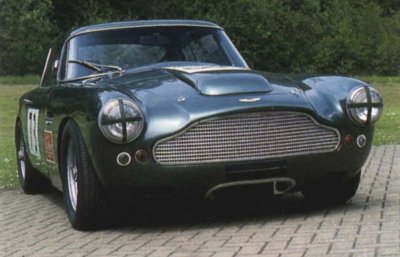 The Aston Martin DB2 had been on sale five years before Aston Martin began contemplating a successor. Christened Aston Martin DB4, it was all-new, which helps explain why it took three years to be finalized, delaying its public launch until autumn 1958.

Key personalities behind the new Aston Martin DB model were general manager John Wyer (who would mastermind the birth of the Ford GT40 in the 1960s), chassis designer Harold Beach, and engine designer Tadek Marek. David Brown himself took a major step forward by agreeing to the development of an entirely new car, for every major component in the DB4 was new, and there was never any thought of compromise by using carryover parts.

Wyer concentrated as much of the new model’s manufacturing and assembly as he could in the modernized Newport Pagnell factory. One unanticipated consequence, however, was that longtime stylist Frank Feeley declined to move to Buckinghamshire, forcing Aston Martin Lagonda to seek outside design help.

The Aston Martin DB4 chassis was simpler and more rigid than that of the DB2s. Wheelbase was an inch shorter but tracks were wider, and improved packaging allowed more reasonable four-place seating. The previous multi-tube design was abandoned for Aston’s first pressed-steel platform-type frame, which in one form or another would persist at Aston through the 1960s and 1970s.

Conventional coil-spring/double-wishbone independent front suspension was retained along with rack-and-pinion steering. Chassis engineer Beach had wanted to use a De Dion rear end, but this would have to wait a full decade and an ordinary live axle was used instead.

Under the DB4 hood was a big, rugged, and visually beautiful twincam six inspired by, but altogether larger than, the Jaguar XK engine. Displacement was 3.7 liters even in its original form, good for a dead-reliable 240 bhp, though a lot more was possible (and realized in future models). Because this was much too lusty for the existing DB2 transmission, a new David Brown 4-speed unit was produced to suit. A few automatic-transmission cars were also produced towards the end of the model run. Naturally, there were disc brakes all around. A good thing, too, for even early DB4s weighed nearly 3000 pounds and were capable of 141 mph.

Aston Martin DB4 styling and body construction were “imported” from Italy. Carrozzeria Touring of Milan, which had already produced several Aston specials, was hired to design the car and supply bodies for it built according to the firm’s patented “super light” principles. This Superleggera construction employed aluminum panels over a lattice of small rubes laid out to define the body shape, an ideal process for a small-volume producer like Aston.

Initially, the DB4 had a Mark III-like grille, shaped rather like a squashed loaf of bread seen head-on, flanked by single headlamps on the corners of the front fenders, but this treatment would undergo five minor variations over the subsequent five years. Series 1 cars’ rear-hinged hoods changed to front-hinged on Series 2 models (built from January 1960). The Series 3 (from April 1961) had minor cosmetic changes, while the Series 4 (from September that same year) had a new-style grille and the high-power Vantage models received headlamps recessed behind sloping covers. The final Series 5 (from September 1962) had more legroom and trunk space and a higher roofline. A four-seat convertible joined the introductory fastback coupe style in late 1961.

DB4 running changes also encompassed mechanicals. Overdrive was added as an option beginning with Series 2, while the Series 4 offered a tuned 266-bhp option called Vantage. A slew of axle ratios was available right from the first, almost anything the customer demanded.

Though the DB4 was much larger, heavier, and costlier than the DB Mark III it eventually displaced, it was the first truly modern Aston and very popular because of it. A total of 1113 were produced — a new high-water mark for the firm — before the closely related DB5 took over in late 1963.