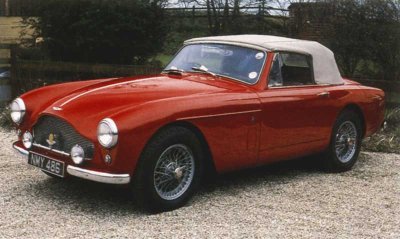 The Aston Martin DB Mark III was the final evolution of the original DB2, and it was faster, more secure, and better-looking than ever.

The Aston Martin DB Mark III, third and final derivative of the DB2 Aston Martin, appeared in March 1957 (originally for export only) and was produced for two years. Almost everything about its technical development, equipment, and marketing was logical except the name. After the DB2/4 and DB2/4 Mark II, it rightly should have been called DB2/4 Mk III, but it wasn’t. Neither could it be the DB3, for that designation had been used on a sports-racing car in the early 1950s.

So, the short-lived DB Mark III carried a name that made little sense in the progression of Aston Martins built before or after. But that doesn’t detract at all from the last, excellent flowering of the basic DB2 design: faster, more secure, and better-looking than ever. Styling was only slightly altered compared with the DB2/4 Mk II.

The nose and grille were more delicately sculptured and very graceful, visually quite similar to that of the aforementioned DB3S sports racer. At the rear were modestly revised fenders incorporating the taillamps of the Rootes-built Humber Hawk. Inside, a new instrument panel designed by Frank Feeley grouped all gauges directly ahead of the driver instead of in the center.

But the most notable improvements on the DB Mark III showed up in the engine, transmission, and brakes. Standard horsepower was up to 162, and a more efficient twin exhaust and dual SU carbs were optional to boost that to 178 bhp. In 1958, both gave way to a final version of the 3.0-liter “Bentley/Lagonda” engine with triple Weber or SU carbs and higher compression (8.68 vs. 8.16:1) for 180 or 195 bhp. Girling front disc brakes were optional through the first 100 cars, then standard, while electric overdrive for the manual gearbox and a new Borg-Warner automatic transmission also became optional extras.

By this time, Aston Martin had decided to concentrate assembly at the old Tickford factory at Newport Pagnell. All DB4-series cars were assembled there, as were the last DB Mk IIIs. Although the DB Mark III was primarily intended as a fast, superbly finished road car, it could be ordered with all manner of competition-oriented goodies: special engine, close-ratio gearbox, engine oil cooler, competition clutch and suspension, and an extra-large (33.6 U.S.-gallon) fuel tank. It was the sort of car that contract team drivers like Stirling Moss were proud to use on the road.