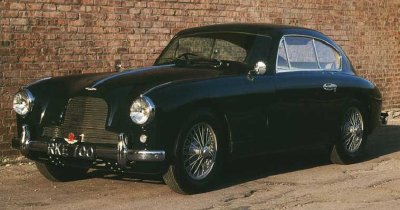 The Aston Martin DB2/4 was the first ever sports car to have a new top-hinged hatchback, which allowed for access to a much-enlarged luggage area.

The Aston Martin DB2/4 bowed in the autumn of 1953 to replace the DB2, and was an altogether better version of it. The designation tells the main story, for this was still the “David Brown” Aston, only now with four seats. Of course, it helped to have a sense of humor about that, because wheelbase was unchanged, and squeezing in those extra seats required a good deal of shuffling, including a smaller fuel tank repositioned above the spare. In fact, there was really no room for a rear passenger’s legs with the front seats pushed all the way back.

As before, there were coupe and convertible body styles, but the coupe’s appearance was subtly altered. A one-piece windshield replaced the previous divided glass, and the rear roofline was bulged out to provide some semblance of headroom for those unfortunate enough to have to ride in the new back seat. The biggest improvement was a new top-hinged hatchback -- the first ever fitted to a sporting car, by the way -- for access to a much-enlarged luggage area.

As on so many of today’s cars, the Aston Martin DB2/4's rear seatback could be folded forward for even more cargo space. Coupe bodies were contracted to H.J. Mulliner and Sons of Birmingham, famous for its Rolls-Royce coachwork and which had recently begun building TR2 shells for Standard-Triumph. Under the hood, the more powerful 125-horsepower Vantage engine was now standard.

The result of all this was an exciting sports tourer that was more practical and versatile than ever. Independent tests showed the DB2/4 capable of 111 mph maximum and 12.6 seconds in the 0-60 mph sprint, making this a fast car by early-1950s standards. No wonder sales surged.

Although the Aston Martin DB2/4 had four seats, the rear passengers lacked enough leg room with the front seats pushed all the way back.

Demand swelled even more beginning in mid-1954 when a larger 2922-cc engine with 140 bhp became available. A third body style arrived in 1955, a notchback coupe version of the convertible. By that time, Mulliner had moved closer to Standard-Triumph (which would take over the coachmaker in 1958), so David Brown shifted coupe body production to Tickford at Newport Pagnell, which already built the convertible; final assembly continued at Feltham for the time being. With this change came a conventional hood and front fenders fixed to the chassis.

Naturally enough, this second-generation DB2/4 became known as the Mark II, and was built for two years. It was capable of 120 mph, which was almost on a par with the much heavier and less nimble Jaguar XK140, yet retained the same feline roadholding of earlier DB-series Astons. It’s interesting to recall that these cars were sold with drum brakes, for disc-brake technology was still in its infancy.

Though DB2/4 production was low by most any standard, this was a successful car for Aston Martin. Exactly 566 “Mark Is” were built, 199 Mark IIs.

At its peak, the DB2/4 was being produced at the rate of six or seven a week even though it was strictly a handbuilt car. Of course, it’s very collectible today, but David Brown had an even better Aston in the works, the DB Mark III.