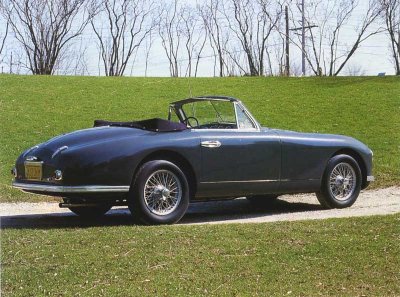 Although it was the second sports car model to carry the "David Brown" label, the Aston Martin DB2 was sleeker, faster, and more successful than the DB1 -- thus considered the first "real" David Brown Aston.

The Aston Martin DB2 that was the first real David Brown Aston, despite the fact the DB1 also beared his name. Brown, who’d made his fortune in transmissions and farm tractors, decided to have “a bit of fun” in 1947 by acquiring the financially ailing Aston Martin and Lagonda motor companies. Both were located just west of London, both were saddled with antiquated facilities, and neither could afford to put its new designs into production. Brown took control, moved Lagonda business into the Aston Martin factory at Feltham, and began to look to the future.

What he inherited with these acquisitions were a fine new Aston Martin chassis and a splendid 2.6-liter twincam six-cylinder engine from Lagonda. The engine had been designed under the guidance of the legendary W.O. Bentley, Lagonda’s technical director since 1935. In an inspired move, Brown had the Aston DB1 chassis modified to accept the Lagonda engine and transmission. The result was an excellent new Aston, the Aston Martin DB2. This car and its descendants would carry Aston Martin successfully through the Fifties.

Three DB2 prototypes were built in 1949, given smooth fastback coupe bodies (shaped by Frank Feeley, who’d styled the DB1), and entered at that year’s Le Mans 24-Hour race in France. Two ran the four-cylinder DB1 engine, the other the new Lagonda six. There was no success that first time out but, two weeks later, the six-cylinder Aston Martin DB2 prototype finished third overall at the Spa 24-Hour race in Belgium.

The Aston Martin DB2 carried a six-cylinder engine from Lagonda, designed under the guidance of the legendary tecnical director W.O. Bentley.

Conceived as a rather spartan open and closed two-seater, the Aston Martin DB2 was more civilized when it went on sale in 1950, with proper bumpers and more complete equipment. Its multi-tube chassis was an evolution of the DB1 design, still with trailing-arm independent front suspension but revised rear axle location.

Like all the best British sports cars of the day, it also had center-lock wire wheels. The engine produced 105 horsepower in standard form, but a 125-bhp “Vantage” version was later offered at extra cost. The 4-speed manual gearbox, a David Brown Industries product, was available with either steering-column or floor-mounted shifter.

Though undoubtedly beautiful, the Aston Martin DB2 was initially more a competition car than a full-fledged road machine. Its aluminum body, with panels handcrafted at Feltham, featured a hinged front section -- hood, nose and both fenders -- that tilted forward for engine access, handy for the track.

The coupe’s rearward vision was restricted by a small backlight, and there was no exterior access to the luggage space. The only opening rear panel was a top-hinged lid covering the spare tire compartment. Some thought the drophead coupe looked even better than the fixed-top model, but only 49 of the 409 DB2s built were open.

Pundits, owners, and magazine road testers all agreed that, though an expensive proposition, the Aston Martin DB2 had a superb chassis, great performance, and an immense amount of character. Even better, it became progressively more civilized over its four-year production run. Original racing-oriented features like engine bay-louvers were abandoned in favor of more and better-quality trim and improved seating. The simple three-piece grille was displaced by a more stylish one-piece design in 1951.

At Aston Martin, however, there was never much time for a design to settle in. Thus, the Aston Martin DB2 was displaced in 1953 by an even more refined version, the DB2/4.