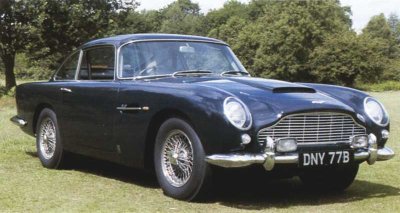 The Aston Martin DB5 was first popularized when it was featured in the James Bond film “Goldfinger.”

Aston Martin is the quintessential British maker of elegant, low-volume performance cars. Lionel Martin and Robert Bumford, who had been selling Singer-brand automobiles, founded Aston Martin in 1913. Racers at heart, the pair drew on the Aston Hillclimb event for part of the name of their new enterprise.

Their early cars dominated English auto “trials” and speed events. But competition success didn’t spell financial security, and in 1947, British industrialist David Brown bought the company. In the pages that follow, you can read about Brown’s DB1 and DB2 models, and about the DB4 that followed. The DB4 of 1958 was the first truly modern Aston and its successor; the DB5 was the most famous, having played the role of James Bond’s movie spy car, most notably, in the film “Goldfinger.”

Since the DB2, Aston’s had built good performance around a strong inline six-cylinder engine. The increasingly cash-strapped Aston introduced a 5.3-liter V-8 with the DBS in 1969, and through the 1970s and 1980s relied on a trickle of high-priced grand touring cars built around this evergreen engine.

Models such as the Vantage V-8 and Virage were heavyweights that garnered more respect than passion. That began to change in the mid 1990s, when Aston returned to the inline-six formula, with the DB7, a pretty coupe that signaled a resurgence of Astons as objects desired for their looks as well as their brute performance.

We'll get started on the next page by taking at look at an early Aston Martin, the DB1.