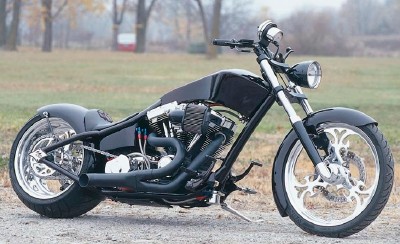 Assassin is one of only a few custom choppers by Scooters Shooterz that is considered a Pro Street bike.

Based in a small town in Indiana, Scooter Shooterz is making a big name for itself. After showing its wares at a custom cycle show, the company was selected to participate in the hugely successful Biker Build-Off on The Discovery Channel. Most of Scooter Shooterz's creations would fall under the Radical category, but this one, named Assassin, is considered a Pro Street bike.

And the Assassin certainly looks the Pro Street part: The steel frame is constructed of substantial 2-1/4-inch tubing, forks are raked at a mild 38 degrees for crisp control, and the black exhaust pipes and engine cases lend a businesslike appearance.

But all show and no go is not the way Scooter Shooterz builds its bikes. To live up to its name, Assassin was fitted with a 124-cubic-inch S&S engine coupled to a 6-speed transmission-and fat 300-mm rear tire.

One of Scooter Shooterz's unusual talents is the ability to design and produce its own wheels. A pair of Executioner rims are used on the Assassin, one of many designs offered by the company.

Go to the next page for more photos and details of this killer chopper, Assassin. 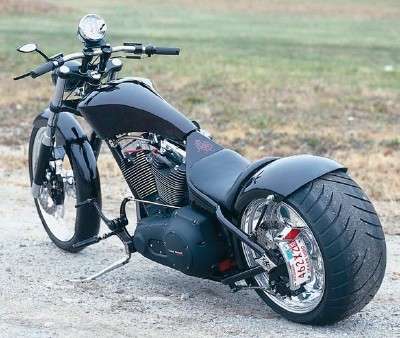 The Assassin Chopper is built with a steel frame with substantial tubing.

The sleek yet minimal design shows that the Assassin Chopper means business. Below are more pictures and details of this no-nonsense chopper.