Where to Find Art Cars 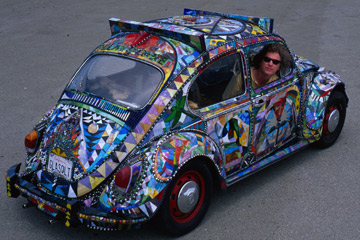 Because of his extreme attention to detail, Ron Dolce's "Glass Quilt" art car took more than 18 years to complete.
Photo by Harrod Blank

For years, there was no official festival for art car enthusiasts. Think of it: it was the 1980s, and no one even had the Internet, let alone Facebook pages or Twitter accounts where like-minded souls could keep tabs on each other. Then, in 1988, the Houston Art Car Parade held its inaugural event in Texas, with 10 or 15 cars in attendance. Now, more than 20 years later, it's the largest art car event in the country, with 250 to 300 vehicles representing all the variations in the art car world.

The ArtCar Fest in San Francisco, Calif., the second-largest art car show in the country, got its start in 1997. In the mid-1990s, art cars also became part of the Burning Man Project, a temporary arts festival that sets up camp each summer in the Black Rock Desert of Nevada. The organizers even created a Department of Mutant Vehicles to approve cars of sufficient artiness for the festival.

There are a few museums devoted to art cars, like the ArtCar Museum in Houston, which has an exterior covered in scrap metal and chrome courtesy of car artist David Best. The American Visionary Art Museum is committed to self-taught artists, and to that end, offers tips and guidelines as part of its "You Can Build an Art Car" exhibit. And Harrod Blank himself is building Art Car World, a museum which already has 42 art cars in its collection, including "Mondrian Mobile," which is based on the artist Piet Mondrian's colorblock works, and "Carthedral," a towering black Gaudi-style cathedral built on top of a hearse.

Art cars can be found the mainstream, too. The Petersen Auto Museum in Los Angeles, Calif., held an art car exhibition in 2003 featuring "Glass Quilt" by Ron Dolce and "Make My Movie!" Dennis Woodruff's drivable billboard -- for himself. Given the Petersen Museum's L.A. location, it seems only right that Woodruff's car is in the permanent collection.

Art car shows are springing up around the country, which is good for local car artists but not so great for the big national shows. Remember, fuel economy goes down when there's a giant shark body attached to your car -- which probably didn't get great gas mileage to begin with. Some art car festivals even reimburse artists for their fuel cost in driving to the show, but those funds are dwindling.

Why did art car spring up when they did, and why do they continue to be popular? Blank's take on it is that these creative cars came at a time when auto companies simply weren't thinking wildly enough. Now, the whole auto industry is changing. "People are modifying what's there and looking for new solutions." And they're having a blast as they go.

For more information on art cars and other related topics, follow the links below.