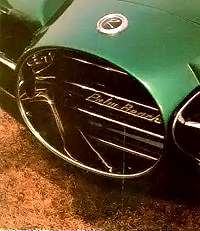 The one-off Palm Beach was announced by a simple but distinctive Ferrari-style mouth.

The AMX Palm Beach was the first experimental shown by a fledgling American Motors, but it was really an artifact of a bygone era. Here's the story of the belated Italo-American hybrid that's been all but forgotten.

Although the initials AMX weren't used until 1965, they would have been appropriate for a much earlier car that technically qualifies as the first "American Motors Experimental." Called Palm Beach, it was a striking two-seat coupe with running gear and a slightly stretched chassis borrowed from the lowly little Rambler, graced by handsome bodywork from master designer Pinin Farina. It was first displayed around the middle of 1956 on the PF stand at major European auto shows, then made its American debut the following spring -- at the Henry Ford Museum in Dearborn, of all places.

American Motors officials understandably said as little as they could about the Palm Beach when it arrived in Detroit. The reason: it was not an AMC project but a holdover from the Nash days, likely the last advanced design effort at the old-line independent before its 1954 merger with Hudson that produced AMC. It was also the last tangible evidence of the relationship Nash president George Mason had forged with the Italian coachbuilder back in the late Forties.

By the time it was shown, AMC's new president, the messianic George Romney, had staked the future not on sporty cars like this, nor even on big family models, but on sensible economy compacts. As far as he and the company were concerned, the Palm Beach was simply a curiosity from the pre-merger attic, glamorous and attention-getting though it was.

Like the second, Vignale-built AMX, the Palm Beach was fully driveable and could be considered a production prototype. It was powered by a modest 172.6-cubic-inch, 82-horsepower Rambler L-head six bearing a 1951 serial number (F-13206). This suggests it may have been the intended successor to the Nash-Healey, the handsome but slow-selling Anglo-American sports car introduced in 1951. We do know the Palm Beach project was well along at the time of the merger, and it's quite possible that some former Hudson engineers contributed to the chassis design.

Indeed, the Palm Beach did have a step-down floor, but its body and construction were totally Pinin Farina and a marked departure from the Rambler's usual unitized structure. The 101.5-inch-wheelbase chassis was a separate ladder-type affair with box-section side members set at the outer limits of the 67.88-inch body width. The undercarriage and suspension came straight from Kenosha, and the 54.5/53.5-inch front/rear tracks were almost identical to those of the stock 100-inch-wheelbase Ramblers. The three-speed manual gearbox was also standard Nash fare. Wheel diameter was 15 inches, but the 5.90-section tires fitted were a bit slim.

On the next page, learn about the AMX Palm Beach's features and specifications.