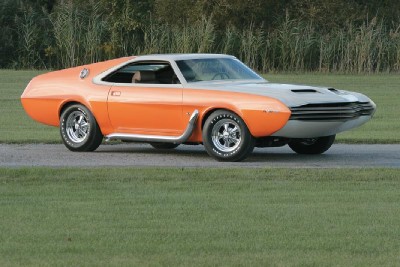 As muscle cars became increasingly popular and the custom craze died down, the AMX-400, built in 1969, was an attempt by Barris Kustom to marry muscle car performance with custom car styling.

George Barris adapted to the changing times, picking up lucrative work from Detroit and Hollywood when jobs for individual customers slowed down. The Barris Kustom shop's close proximity to the entertainment industry led to a steady stream of projects for TV, movies, and celebrities, while Barris' knack for publicity lured the Detroit automakers.

In the late 1960s, Barris teamed up with the American Motors Corporation to produce a bolt-on customizing kit for the AMX that was marketed through AMC dealers. Through this connection, George got his hands on a factory-fresh 1969 AMX and gave it the full Barris treatment.

The biggest modification was the chopped top, which came down 4-1/2 inches. In the process, the windshield posts were raked back two inches, and the rear window was inset between the ­"flying buttress" rear ­pillars.

The nose of the custom car was extended 15 inches and given a wild new look with a radical peaked louver grille. Rectangular headlights were hidden behind three bladelike grille bars, while the hood was revamped with twin scoops and a peaked tip that matched the grille bars' shape.

The headlights of the AMX-400 are hidden behind the radical peaked louver grille.

The rear of the custom car was extended eight inches and reconfigured with a row of 15 louvers that started at the top of the rear window and continued all the way down the trunklid and rear fascia.

A novel taillight system featured a full-width light that glowed green during acceleration, amber during deceleration, and red during braking.

Body details included a wild set of three-inch-diameter side pipes and a pair of competition-style fuel-filler caps. Both filler caps are just for looks; the actual fuel filler door is at the rear of the car.

Since the AMX's stock 315-horsepower 390-cid V-8 was already capable, no engine modifications were performed. Likewise, the interior was left virtually stock, as it was well-equipped from the factory with power steering, air conditioning, and a tilt steering column.

Total build time was only three months. The AMX-400 toured the country on the ISCA circuit for a few years, and also appeared in an episode of the TV show Banacek in 1972 before going into storage.

Mike and Lin Geary acquired the car in 2003 in relatively sound condition, with a mere 3300 miles on the odometer, and set about refurbishing it. The car was repainted by Tabz Toys in Lan­caster, New York, and Ron Lasker re-created the original pinstriping.

After the restoration, the AMX-400 made its public debut at the AMC 50th Anniversary show in Kenosha, Wisconsin, in July 2004.

Restyling muscle cars never really caught on in the hot rod and custom world, but the AMX-400 remains an impressive artifact of an uncertain period.