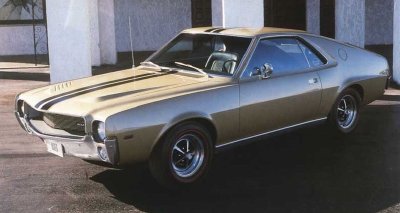 Richard A. Teague has always been a “two-seater kind of guy,” and the production American Motors AMX was his car. It originated in late 1965 when the American Motors styling director worked up four non-running show cars at the behest of company chairman Roy D. Chapin, Jr., who wanted to show the public that AMC was a going concern capable of more exciting stuff than the workaday economy sedans for which it was noted.

Included in this quartet, which toured the nation as “Project IV,” was a slick fastback coupe that Teague named AMX (logically, for “American Motors Experimental”). Its most novel feature was the “Ramble Seat,” an updated version of the old rumble-seat idea, with a rear windscreen and a pair of auxiliary bucket seats that could be flipped up to accommodate two extra passengers al fresco. There was also a small, conventional back seat, leading Teague to call the AMX package a “2 + 2 + 2.” With its taut, eager styling, the AMX met with such overwhelming response that AMC contracted Vignale of Italy to build a running model.

Meanwhile, Teague was working on the Javelin, AMC’s reply to the Ford Mustang, giving it much of the AMX show car’s styling flavor. Being at AMC, and Packard before that, Teague was used to doing big things on small budgets, and he hatched a brilliant idea: take 12 vertical inches out of the new 109-inch-wheelbase Javelin to create a two-seater that could be tooled for very little money, thus providing the AMX with even more of the image-boosting excitement Chapin was seeking.

The result appeared in February 1968, sans “Ramble Seat” but still called AMX. Though its Javelin heritage was obvious, Teague gave it a “faster” back, a different grille, longer hood, and racy rear-fender creases. AMC engineers gave it their biggest powerplant ever: a 390-cubic-inch enlargement of the thinwall V-8 previously available as a 290 (1966) and 343 (1967), which were standard and optional, respectively.

With two seats and a wheelbase an inch shorter than Corvette’s, the AMX was often seen by the press as a Corvette competitor, though AMC never called it a “sports car.” But like the 1957 T-Bird, it could be a high-performance car. To prove it, AMC hired Land Speed Record ace Craig Breedlove and wife Lee to take a couple of AMXs out for a spin on a Texas track.

“Spin” they did, streaking 24 straight hours to 106 new national and international speed records while averaging 140.7 mph. The Breedloves later hit 189 mph in a USAC-sponsored run at Bonneville. Soon, AMXs were cleaning up on the dragstrips (thanks to Lou Downy, Shirley Shahan, and others) and in amateur sports-car competition (though one was nosed out by a Corvette for the 1969 SCCA national championship).

The AMX generated lots of excitement but not many sales, something AMC had halfway expected. The 1969 AMXs were predictably little changed apart from a $52 higher base price, new and very bright “Big Bad” colors, and an optional “Go” package.

Volume improved but slightly, so AMC decided to bail out after the 1970 models, which carried revised frontal styling that added two inches to overall length, plus “power blister” hood, high-back seats, and AMC’s new 360 V-8 as standard. Alas, production plunged to half the previous year’s. Teague tried to keep the car alive, mocking up an AMX version of his restyled humped-fender 1971 Javelin, but to no avail.

Still, Teague managed a moral victory in two exciting mid-engine exercises, the non-running AMX/2 of 1969 and the follow-up 1970 AMX/3, of which six were built. The latter, developed with help from Italian sports-car engineer Giotto Bizzarrini and BMW, had all-independent wishbone suspension, big four-wheel disc brakes, a 340-bhp 390 engine, and handsome styling — perhaps Teague’s best effort ever and chosen over a competitive (and rather dull) proposal by Giorgetto Giugiaro.

The AMX/3 might have seen limited production, but AMC was on a downhill slide by 1970 and had no money for that or even a continuation of the Javelin-based AMX. Now there’s no more AMC, and Teague is retired.

But not to a rocking chair. Among his many and varied current activities is the occasional presentation to AMX enthusiasts — which is only fitting. After all, they’re his kind of people.

For more details on the American Motors AMX and other sports cars, see: