Alpine-Renault may not have been the most high-profile automaker, but they did build their share of championship sports cars. See more pictures of sports cars.

Alpine-Renault was one of the only successful French manufacturers of sports cars immediately following World War II. In this article, you'll find out why.

Jean Redele, once a Dieppe garage proprietor, founded Alpine to create racing and sports cars using Renault engines -- hence the name “Alpine-Renault.” The Alpine name would turn out to be a somewhat unfortunate choice, commercially speaking, as British carmaker Sunbeam owned the copyright to the name, having produced an “Alpine” car model the year before Redele formed his company. Happily, that confusion had no bearing on Alpine’s performance on the race track.

The Alpine-Renault A310 was a roadgoing machine that employed many of Alpine-Renault’s classic features: all-independent suspension; a rear-mounted engine, then the most powerful Renault had to offer; and Alpine’s signature steel-backbone chassis, with a separate fiberglass body. Later iterations of the vehicle were second only to the Porsche 911 -- no small achievement.

The A310’s successor, the Alpine-Renault GTA, retained high levels of performance while updating its look for the next generation. However, due to Renault’s stake in American Motors, which is owned by Chrysler, the GTA was not sold in North America because it would have provided unwanted competition with Chrysler’s TC by Maserati.

While not all of Alpine’s models are available for purchase worldwide, nothing could stop them from collecting race wins from around the globe, from Michigan to the Alps. Continue to the next page, where you’ll learn all the details of Alpine-Renault’s sometimes-troubled history, complete with car profiles and pictures. 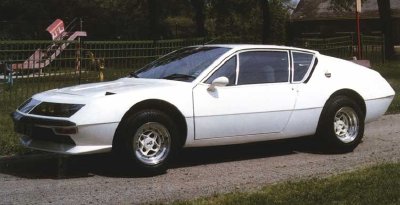 The Alpine-Renault A310 wasn’t the first of the "private enterprise" Alpine Renaults. Its predecessors, designed and manufactured by Jean Redele’s company in Dieppe, France, appeared in the early Fifties. By the Sixties, Alpine was much closer to the Renault factory technically and commercially. Its mainstays in these years were the A108 and A110 series, fast but fragile rear-engine coupes with Renault running gear and fiberglass bodies. But these were cramped little two-seaters more suited to racing or European rallying than normal road work.

A new model was long overdue by 1971, and Alpine-Renault surprised everyone that year with the new Alpine-Renault A310, a much larger, more spacious, and altogether more practical machine. It was so different from the 1957-vintage A108/A110 that both the old and new models continued in production for a number of years. The former were high-strung two-seaters for youngbloods (rather the “Corvette types” of France), the latter more sophisticated long-distance GTs.

Even so, the Alpine-Renault A310 followed the established -- and famous -- Alpine-Renault formula in many ways: rear-mounted engine, steel backbone chassis with all-independent suspension, many standard components from the Renault parts bin, separate fiberglass body. Compared with the A110, it was longer, wider, and far roomier, with genuine 2 + 2 seating and graceful, modern styling (some compared its front end to that of the Ferrari Daytona).

The original Alpine-Renault A310 used the most powerful Renault production engine then available, the overhead-valve 1.6-liter four from the R16, matched to a 5-speed all-synchromesh transaxle. Automatic wasn’t available, and never would be. This chassis was capable of handling a lot more power. Even so, the four’s 127 bhp gave the French coupe a 131-mph top speed.

Unfortunately, the Alpine-Renault A310 was dogged by quality control problems early on, and many prospective customers shunned its rear-engine layout (the DeLorean encountered similar resistance in the Eighties, though it never seemed to bother Porsche’s 911). Then came the first Energy Crisis in 1973-74, which only compounded the sales difficulties. As a result, Alpine-Renault soon found itself in financial hot water. But Renault came to the rescue by buying the firm, and Alpine has seen steady expansion ever since.

The Alpine-Renault A310's appearance was relatively unchanged during the 14 years of its production.

Autumn 1976 brought the definitive Alpine-Renault A310, powered by a new 90-degree V-6. This engine, jointly developed by Peugeot, Renault, and Volvo and used in so many other cars in the late Seventies/early Eighties (including the DeLorean), suited the Alpine-Renault A310’s character very well indeed. It offered an easy 150 bhp, pushing top speed up to about 137 mph and making this the world’s quickest rear-engine production car apart from the Porsche 911.

Exactly 2334 four-cylinder Alpine-Renault A310s had been built in five years, but the new V-6 sold even better, helped by further improvements: standard 5-speed gearbox in 1979, upgraded interior appointments from late 1982. Production continued at Dieppe until 1985, when the Alpine-Renault A310 gave way to the new GTA. Sales were confined largely to Europe (mainly France and Germany), but a few Alpine-Renault A310s made it to the U.S. via the infamous “gray market” of the late Seventies/early Eighties.

Whether four-cylinder or V-6, the Alpine-Renault A310 was essentially a car for younger, more tolerant drivers. No matter how hard Renault tried to disguise the rear-engine location, it couldn’t banish the layout’s characteristic tail-out handling behavior, which could feel quite spooky in some circumstances. 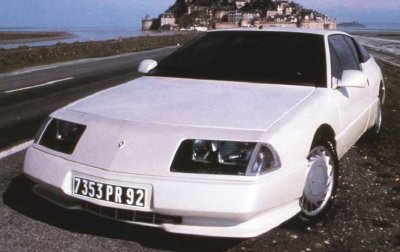 Alpine-Renault GTA was slated for U.S. sale but was cancelled by Chrysler Corporation’s buyout of Renault’s equity in American Motors.

Renault allowed the Alpine-Renault A310 V-6 to run more than eight years before fielding a stunning replacement intended to carry the marque into the 1990s. Although the new Alpine-Renault GTA is similar in many ways, it has a lot that’s completely new. It’s certainly the most professional A-R yet.

First, though, the similarities. The A310 used a steel backbone frame, with the engine slung out behind and driving the rear wheels. Its fiberglass body afforded 2 + 2 (or, more charitably, close-coupled four-seat) accommodation. The Alpine-Renault GTA keeps this design faith in a more modern idiom. In addition, it’s larger and roomier: three inches longer in wheelbase, four inches wider, two inches taller.

Structurally, the Alpine-Renault GTA is altogether more integrated than the A310, as it should be, coming from Renault. For example, its backbone frame uses much thinner metal, while the A310’s entirely separate body has been axed in favor of fiberglass panels bonded to the chassis, resulting in a steel/fiberglass monocoque. As if to dispel the fiction that fiberglass body cars are necessarily light, the Alpine-Renault GTA weighs in at 2540 pounds, with the bodyshell accounting for 575 pounds of it, about 20 percent.

Compared with the A310, the Alpine-Renault GTA’s styling was very carefully considered to optimize aerodynamics. Still, headlamps continue with sloping glass covers, and a low front “chin” spoiler and smartly integrated rear spoiler are also retained. But shape makes all the difference, and the Alpine-Renault GTA boosts a coefficient of drag (Cd) of only 0.28.

Interestingly, Renault claims that the more significant CdA air-resistance figure (Cd × frontal area) is 5.1 square feet for the GTA, the lowest of any production car in the world. It is in such details that the Alpine-Renault GTA is so obviously a product of Renault rather than Alpine-Renault, and it made an immediate impression.

Mechanically, the Alpine-Renault GTA marked a further evolution of the A310. Power is still provided by the PRV V-6, but there are now two versions. The basic Alpine-Renault GTA carries a normally aspirated 2849-cc unit with Renault’s own unique combination of single and twin-choke carburetors, good for 160 bhp at 5750 rpm. But the big news was availability of the 200-bhp 2458-cc turbocharged engine from the big Renault 25 sedan, which gives the Alpine-Renault GTA 150 mph flat out.

As in the A310, both engines mount longitudinally and drive forward to an all-indirect Renault 5-speed gearbox. Automatic is again conspicuous by its absence, which brings us back to more similarities: all-independent suspension by coil springs and double wishbones, all-disc brakes, rack-and-pinion steering (albeit with standard power assist). To trim the tail-heavy handling (front/rear weight distribution is 39/63 percent), Renault specifies larger tires for the rear than the front, also as before except that both are bigger here: 195/50VR-15 fore, massive 255/45VR-15 rubber aft.

As suggested by the Alpine-Renault GTA’s sleek interior, this sports car was able to reach speeds near 150 mph.

Although the Alpine-Renault GTA feels like a much better car than the A310, its handling still occasionally betrays that heavy rearward weight bias. Closing the throttle in tight corners can result in a spin, as it does on many Porsche 911s, though it’s hardly hurt the sales of those cars.

And make no mistake: the Alpine-Renault GTA is as fast as it looks, especially the Turbo. Yet because of the rear-engine position, it’s surprisingly quiet when driven briskly. There’s also no doubt that it has more interior space than its obvious rivals. Renault believe they’ve produced a better car than the 911, though only time will tell.

Sad to say, the Alpine-Renault GTA won’t be sold in North America after all, even though designed for U.S. standards and intended to be the new flagship of Renault’s American-market fleet. The reason, of course, is the 1987 Chrysler Corporation buyout of Renault’s 46-percent stake in American Motors and, more to point, the close similarities in price and target audience between the Alpine-Renault GTA and Chrysler’s long-delayed Maserati-built TC.

Understandably, Chrysler doesn’t need two $30,000 sports cars (it’ll have trouble enough with one). And, corporate pride being what it is, any automaker will prefer its own product over one from an erstwhile rival, even one picked up as part of an acquisition.