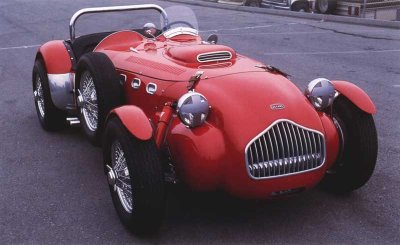 Purposeful is the only way to describe the most famous of Allards, the J2X. Extended wheelbase, sidemount spare, and more forward engine made it a better racer than the J2.

As far as we know, Sydney Allard’s first Allard J2X carried chassis number 2138 and was delivered to a buyer in London on September 7, 1951. The second one went to America on November 21. Thus began a production run that would see just 83 cars. The last one left the factory on November 29, 1954, destined for the U.S.

The main visual difference between the Allard J2X and the earlier J2 was their spare tire location: hidden in a compartment low in the back on the J2, an exposed side-mount (just forward of the cockpit) on J2X. The differences were as few underneath, but far more important. Typical Allard suspension -- split I-beam front axle, De Dion rear with long radius rods to the chassis -- was retained, as were all-round coil springs and inboard rear brakes.

In front, the “trailing” radius rods had been moved from behind the axle to a position in front of the axle (“leading” rods), which necessitated a six-inch frame extension at the front. This explains the “X” designation (for extended) as wheelbase remained at 100 inches, as on the Allard J2. It also allowed the engine to be mounted 7.5 inches further forward, which added considerably to cockpit footroom and made the car handle much better at the same time.

As before, engine choices were L-head Mercury V-8, the same with Ardun overhead valves, and ohv Cadillac or Chrysler V-8s. The vast majority of Allard J2Xs were ordered with the last, since the Ford engine, with or without ohv, was no longer a viable contender in the horsepower race.

Most Allard J2Xs also seemed to have center-lock, knock-off wire wheels rather than the stamped-steel discs of the J2, though this is not a hard and fast identification point. The Allard J2X was conceived as a competition car that might be used for touring, while the J2 was the other way around (though more of them probably raced than toured).

At speed, an Allard J2 or J2X was a spectacular sight: rear end hunkered down from the torque of a big Cadillac V-8, front end in the air, the caster angle caused by the swing-axle ifs making the front wheels look “knock-kneed” as the car weaved and dodged its way along.

They may not have been as exciting to drive fast as they looked from the sidelines, but drivers we’ve talked to admit that while the De Dion rear axle kept the back end pretty much under control, the same thing couldn’t be said for the front. Staying on course in either of these beasts was often a matter of aim and hope.

Regardless, the Allard J2X won races, sometimes looking deceptively casual in the process. Spectators at early races from Watkins Glen and Bridgehampton to Torry Pines and Pebble Beach remember Fred Wacker, Mike Graham, and Bill Pollack as being the primary practitioners of the Allard driving art, the last at the wheel of Tom Carstens’ black number-14 J2X complete with chrome-plated luggage rack and whitewall tires!

The view from behind the wheel of the Allard J2X.

They were cars to root for, those Allards -- British hot rods with big American V-8s, something a great many racegoers could readily identify with. They were not “giant killers” because they were giants themselves, but they were the epitome of low-dollar racing in their day -- backyard challengers to the ever-increasing number of costly, multi-cylinder, high-technology Ferraris.

And unfortunately, Sydney Allard could no longer keep pace. By 1954, you either bought a Ferrari, Porsche, Maserati or Aston Martin if you wanted to win races, or you built your own cars with a lot of money and know-how, as Briggs Cunningham did.

The Allards’ days have passed, but they will be fondly remembered and missed. Racing was fun then.