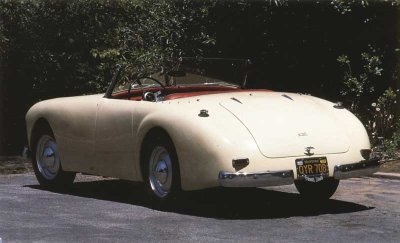 The Allard K3 was Sydney Allard’s first attempt at modern sports-car styling, which bore a passing resemblance to the contemporary Cunningham C2.

Having been very successful in building competition-oriented cars, Sydney Allard turned to the design and production of a more serious touring model in 1952. The result was the new Allard K3, generally offered with the buyer’s choice of engine, with engine mounts then fitted to suit. Allard kept his unique split-axle independent front suspension and borrowed his Allard J2’s wider De Dion rear axle.

Otherwise, the Allard K3 frame was totally new. Made with a pair of stacked chrome-moly tubes as side rails, heavily gusseted with steel plates, it was both lighter and stronger than the previous stamped-steel channel-section chassis.

Bodywork, too, was all-new, being a modern “envelope” type with integral rather than separate fenders. Inside was a bench seat that could accommodate three in relative comfort.

Though built on a wheelbase six inches shorter than the K2’s, the Allard K3 seemed bigger than it really was. It was too often compared with the contemporary MG, Triumph, Porsche, and Austin-Healey, all of which made the Allard K3 seem huge when, in fact, its main bulk was in width (tracks were 56.5 inches front, 58.5 inches rear) and weight (2580 pounds at the curb).

Road & Track magazine tested an Allard K3 in October 1954 and gave it high marks for acceleration, handling (weight distribution was 50/50), and steering. However, the editors complained that the wheels wouldn’t turn far enough in either direction and suggested that parallel parking was a definite problem, let alone running a gymkhana.

They also felt that the clutch and transmission were weak points and criticized the aluminum body’s susceptibility to damage from flying gravel. The cockpit came in for the most criticism despite its greater room. The doors didn’t open wide enough, there was no provision for heating or defrosting, and the windshield wipers were inadequate.

Worse, ventilation with the top and windows up was totally inadequate, and with top up and windows down, the car couldn’t be driven more than 35 miles per hour without the top flapping to the passengers’ distraction. So although Allard had intended this as a sporting, fast, and comfortable tourer that could be sold in all countries, it was apparent that the Allard K3 needed much more development. Not surprisingly, most Allard K3s came to the U.S. Two went to Mexico and Canada, and one each to Germany, Venezuela, Colombia, Guatemala, India, Belgium, and England.

For its day, the Allard K3 was reasonably well finished, if still not as good as cars from the volume manufacturers. Allard had discovered, to his dismay, that what passed for good fit and finish in a competition car was a far cry from what was needed for a saleable road car.

This reflected a big problem. While Sydney Allard had many “better ideas,” his company was seriously undercapitalized, lacking both the facilities and manpower to develop his designs fully. This didn’t seem to matter with his competition cars, particularly in the early 1950s, when racing didn’t have anywhere near the sophistication it does today, but it made producing a competitive road car extremely difficult. When a customer paid well over $5000 for a car (the Allard K3 sold for about $5300 in the U.S.), he expected to get something he could proudly show off to his friends. In that respect, the Allard K3 was an embarrassment in many ways.

Early publicity had indicated that the Allard K3 was available with English Ford V-8, American Mercury V-8, Chrysler hemi V-8, or Jaguar XK dohc six. Yet even that choice of powerplants and Allard’s proven race record still weren’t enough to make this car the commercial success he thought it would be. The last Allard K3 left the Allard factory on October 8, 1954. Total production was just 61. Still, it would prove to be neither the most nor least successful of Sydney’s memorable hybrids.