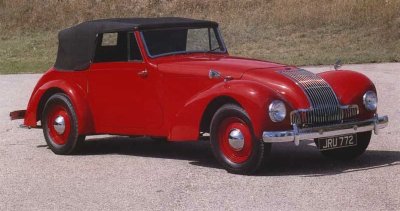 Sydney Allard, developer of the Allard K1, was 19 years old in 1929, a member of a London family who owned a garage that sold British Ford cars. Sydney raced a three-wheel Morgan Super Sports at the Brooklands circuit that year, but with very little success. Deciding he needed an extra wheel, he added one to create the first Allard special.

Sydney’s first fling with a Ford, a relationship that would last as long as he built cars, came in 1932 when he bought a new four-cylinder Model B and installed a highly modified Model BB truck engine. That car went so well that he began to think of what he might do with one of Ford’s V-8s, particularly in a lightweight chassis.

Through an incredible coincidence, Allard found just the car he had been looking for at the Tourist Trophy race in Ards, Ireland, in 1934. The area Ford distributor had shown up with two shiny specials fitted with the American flathead engine, and Allard bought one without a second thought.

Allard campaigned the car for two seasons in track races, rallies, and hillclimbs. But success in somebody else’s car wasn’t enough. Allard wanted to build his own.

The opportunity came in 1936 when he bought a wrecked ’35 Ford coupe. After towing it home on a Friday, he started dismantling and rebuilding it on Monday. By Saturday, the first car to carry the name Allard Special was running. It followed a pattern that Sydney would continue to use in future years.

The frame was shortened, lightened, and fitted with a 1932 Ford front-axle assembly, which was lighter than the ’35 unit. Unlike later Allards though, this chassis was topped with a Bugatti Type 51 body. This oddball hybrid was a winner from the start. During the winter, suspension engineer Leslie Bellamy designed the now-infamous split-front-axle independent suspension that was to become a trademark of all early Allards.

World War II found the Allard garage repairing and maintaining British army trucks; as soon as hostilities were over, Sydney again turned to car building, but with a new seriousness. Like so many others in postwar England, his major problem was a lack of materials, particularly steel and aluminum. This was one of the many reasons why Allard relied so heavily on proprietary parts for his cars. His choice of Ford components rather than some other make’s stemmed from a combination of availability, cost, and his own familiarity with them.

Designated K1, Allard’s first postwar car was largely a carryover from the limited-production prewar J1 except for a six-inch-longer wheelbase. The engine (a British-built 221-cubic-inch Ford V-8 with 85 horsepower) was virtually stock. Transmission, driveshaft, rear axle, and brakes were also stock Ford, as was the front axle. However, the last was split in the center to create a swing-axle type independent front suspension.

A torque tube and beam axle located the rear wheels; front and rear springing was by Ford’s antiquated transverse leafs. The frame was made up from stamped-steel channel sections by Thomsons of Wolverton specially for Allard. Side rails and cross-members were designed to fit the existing Ford suspension pieces, because there was no thought at that time of using anything but Ford running gear and chassis components.

Most early Allards -- the K, L, and M two- and four-place models -- looked much the same. Some have compared them to the BMW 328, with the same sort of squarish “waterfall” grille and separate fenders front and rear. All were right-hand drive, of course. The four-place models had roll-up windows. Bodies, all built by Allard, employed a wood-frame overlaid with steel panels.

As far as we know, the Allard K1 was never offered for sale outside England, although company records show a few going to Brazil, Argentina, Belgium, Australia, and possibly three to the U.S. As expected, the vast majority were sold in England and Scotland. Some Allard K1s carried Canadian Mercury V-8s instead of the British Ford unit.

The K-series was really a stepping-stone model for Allard, who would go on to even greater fame and success with the J2 competition model.