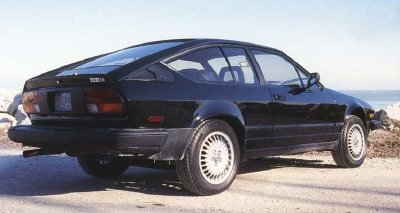 When the Alfa Romeo Giulia Sprint GTV was dropped from production in 1974, Alfa introduced the Alfetta GT fastback coupe to replace it. Virtually everything was new. Only the dohc four-cylinder engine with Spica fuel injection was retained.

The Alfetta’s independent front suspension was similar to the GTV’s, but had longitudinal torsion bars in place of coil springs. Drive was carried to a 5-speed transmission in unit with the differential to form a rear transaxle that was part of a De Dion assembly with coil springs. Brakes were disc all around, with the rears moved inboard to reduce unsprung weight.

All shared the same fastback coupe body, again by Bertone. While roomier than previous Alfa coupes, it wasn’t noted as an aesthetic success. It also wasn’t quite large enough to provide practical transportation for four, and wasn’t sleek enough to be either a true GT or sports car. And though it looked like it should have had a hatchback, it didn’t. However, these models were the best-handling Alfas to date, partly because of excellent suspension geometry and partly because of the near-equal fore/aft weight distribution conferred by the rear transaxle.

In 1981, this car took on a new image and a new powerplant to become the Alfa Romeo GTV-6. Exterior sheetmetal and appearance remained much as before, but structure, suspension, brakes, transaxle, wheels, and tires were all upgraded to cope with a bigger and more potent engine. It turned out to be a sterling new 60-degree V-6, with a single overhead camshaft on each bank, driven by toothed belt, plus Bosch L-Jetronic fuel injection (specified for both the American and European versions).

Inclined valves above hemispherical chambers were retained, but were now actuated by a rather complicated arrangement. The camshafts were directly over the intake valves, but worked the exhaust valves via tappets, transverse pushrods, and rocker arms. Displacement was 2492 cc from a bore of 88 mm and a stroke of 68.3 mm, a far cry from Alfa’s long-stroke engines of old. Rated horsepower was 154 (SAE) at 5500 rpm with 152 lbs-ft torque at 3200 rpm, enough to propel the 2840-pound GTV-6 from 0 to 60 mph in 8.4 seconds and on to a top speed of 125 mph.

A view under the hood of the Alfa Romeo GTV-6.

The interior wasn’t overlooked either. A tilt wheel, leather upholstery, higher-grade carpeting, and standard air conditioning all made the driver feel good, even if they didn’t contribute to performance. Even more welcome was a new dashboard with all instruments placed directly in front of the driver, eliminating the odd arrangement of previous models in which the speedometer and minor gauges were inconveniently placed in the center of the dash.

The shift mechanism to the rear-mounted transmission was thought to be somewhat soft and rubbery. Complaints were voiced about the twin-disc clutch being grabby, though it never slipped. But these are things that could be changed through development, and were.

The best part of the Alfa Romeo GTV-6 was its excellent balance and overall handling. Critics and Alfa loyalists alike wondered why this suspension couldn’t be put under the Spider. It could, of course, but Alfa management didn’t want to go any further with their convertible.

Whether the Alfa Romeo GTV-6 will be replaced is uncertain in the wake of Alfa Romeo’s takeover by Fiat in 1987. If we’re lucky, the new owners will replace this spirited but aesthetically awkward coupe with something truly modern -- dare we say futuristic? -- and that should be well worth waiting for.