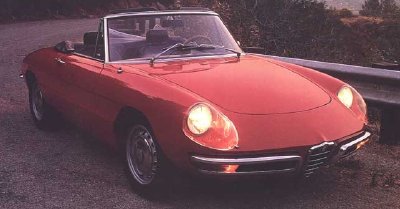 The Alfa Romeo Giulia -- follow-up to the beloved Giulietta -- was the controversially styled Duetto Spider. When it bowed for 1966, critics dismissed its tapered nose and tail and deep bodyside trough as trifles. But over time, these elements came to identify a classic design from the house of Pininfarina.

In 1966, Road & Track found the Alfo Romeo Giulia “a contrived design with meaningless styling gimmicks.” In 1989, however, the magazine saw “pure beauty and refined aesthetic detail.”

Don’t fault Road & Track; hardly anyone praised Alfa Romeo’s follow-up to the beloved Giulietta Spider during its production run. Even the factory reacted by eventually squaring up the distinctive pointed tail. But time has vindicated the Giulia Duetto Spider, the final design credited to Battista Pininfarina himself. Its front and rear symmetry, alluring headlamp covers, and bold bodyside trough is the stuff of automotive art.

Alfa had carried the original Giulietta Spider styling into the succeeding generation of small coupes, sedans, and convertibles. This family debuted for 1962 and was called the Giulia Series, another Romeo and Juliet reference. When finally the next Spider was unveiled in 1966, Alfa fans recognized styling cues from Pininfarina show cars going back a decade. Officially, this was the Giulia Spider 1600, but Alfa held a name-the-car-contest. The winner, one Guidobaldo Trionfi, riffed on the two-cam, two-seat, two-carburetor motif and came up with Duetto.

It was more refined than the Giulietta Spider, heavier and with a longer wheelbase. It retained a solid rear axle but got four-wheel disc brakes. Underhood was the 1.6-liter four that bowed in the Giulia but now with standard twin Webers and a five-speed gearbox.

The interior of the Alfa Romeo Giulia.

Emissions rules kept Alfa from the U.S. market in 1968, but the roundtail roadster returned for ’69 with a fuel-injected 1977cc enlargement of the 1600. Alfa tabbed this the 1750, recalling its famous prewar cars. Purists insist the 1750 is not a true Duetto; more-generous Alfisti say the tapered tail qualifies it as one. These cars had 132 hp, did 0-60 in 9.9 seconds, and hit 114 mph. U.S. smog laws shut out the ’70 Spider, and when it returned for ’71, it had a squared rump and no claim to the Duetto name. The core of Pininfarina’s brilliant original design survived, however, until 1993, when Alfa at last retired the Spider.