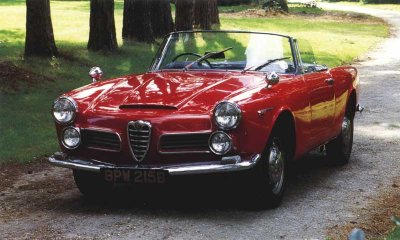 Alfa Romeo 2600s weren’t sold in the U.S. due to high prices but found favor among Alfisti in Britain,hence this righthand-drive Touring roadster. Both looked likegrownup Giulias,which was probably deliberate.

By 1958, the 1900 was the “senior” Alfa Romeo and in need of an update. Its successor arrived that year as the Alfa Romeo 2000 (internal designation: Series 102), with new bodywork wrapped around what was basically the Alfa Romeo 1900 engine and running gear. First out were a berlina, designed and built by the factory, and a dashing spider with bodywork by Carrozzeria Touring. A Sprint coupe designed by Bertone completed the range in 1960.

All three, but particularly the spider, bore a family resemblance to contemporary Alfa Romeo Giuliettas. The Sprint was a harbinger of the Alfa Romeo 2600 and Giulia Sprint models to come, having a notchback 2 + 2 body with minimal A- and C-pillars and an almost non-existent B-pillar. The result was a very light, airy greenhouse with lots of glass area. But though these were the best-looking production Alfas yet and extremely comfortable touring cars, their weight and relatively low power made them slower than the Alfa Romeo Giuliettas and less fun to drive.

The Alfa Romeo 2000’s dohc four-cylinder engine was essentially the same as the second-series 1900 unit, with cast-iron block, aluminum head, and 1975 cc from an 84.5-mm bore and 88-mm stroke. The Berlina engine, with a single downdraft Solex carburetor, produced 105 horsepower at 5300 rpm, while the Sprint and Spider versions put out 115 bhp at 5900 via twin Solex sidedraft instruments.

If a bit on the conservative side, the Alfa Romeo 2000 Sprint and Spider reflected the best of then-current Italian styling. Mechanically, they were obviously products of racing experience, with their twincam engines, large Alfin brakes, well-developed suspension, and quick, positive steering. But at 2640 pounds for the Sprint and 2596 for the Spider, neither had the sort of power-to-weight ratio for the sparkling performance expected from a firm like Alfa Romeo.

Only a little over 7000 of the Alfa Romeo 2000-series cars were built through 1962. The Spider accounted for almost half (outpacing even the sedan), though it was built for the full five years versus only three for the Sprint.

In an effort to regain the model spread lost by concentrating so heavily on its Giulietta/Giulia series, Alfa Romeo gave its senior 2000 line a new six-cylinder engine in 1962. Typically Alfa, it had chain-driven double overhead camshafts, cast-iron block, and aluminum head, but was developed more from the smaller Alfa Romeo Giulietta.

Though physically longer than the 2.0-liter four, the 2.5 six fit into the engine compartment with surprising ease, suggesting that Alfa engineers may well have had this move in mind when they created the Alfa Romeo 2000 four years earlier. Bore and stroke measured 83 × 79.6 mm, making this Alfa’s first oversquare engine.

Bodywork for the Alfa Romeo 2600 was identical with the 2000 series except for minor trim changes. The factory-built berlina (sedan), Bertone Sprint coupe, and Touring Spider were later joined by a striking Zagato coupe with a jutting, rounded nose.

A view from under the hood of the Alfa Romeo 2600 Touring roadster.

With its punchier new engine and consequently superior power-to-weight ratio, the Alfa Romeo 2600 series was more entertaining than the 2000 and more commercially successful, though not by much. The big problem was that an Alfa Romeo Giulietta cost about half as much, yet was twice as much fun to drive.

Still, the large Alfas were excellent cross-country cruisers: quiet, comfortable, relatively roomy, and with traditional Alfa Romeo handling that always made the driver feel secure on any road. Unfortunately, high weight meant they had to struggle to reach cruising speed.

Both Alfa Romeo 2600 and Giulia arrived with four-wheel disc brakes, something new for Alfa. In addition to being safer, they were a real advantage in competition or sport driving, frequently enabling the Alfas to win through better braking when they couldn’t do it by superior speed. Stamped-steel disc wheels were still standard, as on all postwar production Alfas.

For unknown reasons, Borrani center-lock knock-off wire wheels, so common on other Italian sports and GT cars, were not offered as standard Alfa equipment. Still, the cars didn’t suffer visually, and the disc wheels were certainly cheaper and easier to maintain.