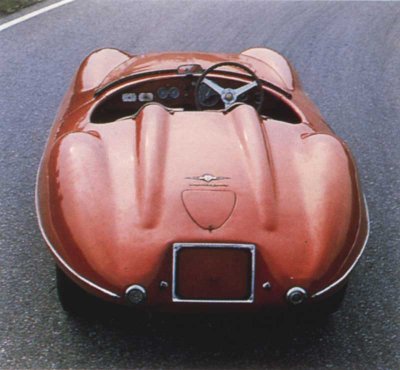 Alfa Romeo retained two of the nine Disco Volantes built. Both can be seen at the company’s Milan museum. Here, the original racing prototype. “Flying saucer” nickname is obvious from the squat, shapely body lines.

The Alfo Romeo Disco Volante reminded some observers of a UFO. These sports cars certainly seemed like something from outer space and were even meant to fly -- on the race tracks of Europe.

This senior line never materialized (though Alfa would get around to a six, the 2600 series, in 1962), but the firm needed an image boost (the 1900 sedan was far from lovely), so it decided to build a batch of 3.0-liter engines for a group of lightweight racers based on the 1900 chassis (modified via Alfin-type brakes with four extra-wide leading shoes). Thanks to their unusually smooth, aerodynamic bodywork, these cars were soon dubbed Disco Volante by factory hands, and the name stuck.

Both versions were slated to contest the 1952 Le Mans 24 Hours, but no Alfa Romeo Disco Volante raced until the following year’s Mille Miglia, when one four and three sixes were entered, the latter with an enlarged 3576-cc engine (bore and stroke: 88 × 98 mm). Despite broken steering towards the end, the legendary Juan Manuel Fangio drove a six-cylinder coupe to second behind a 4.1-liter Ferrari, the only Disco Volante to finish.

Alas, Alfa’s image-polisher would score only one other triumph: the 1953 Supercortemaggiore at Merano, which Fangio won outright in a 3.0-liter roadster. In between were non-finishes at Le Mans and Spa and withdrawal of the entire team before the Nurburgring 1000 Kilometers.

The story would have ended right there had Alfa not sold off all but the original prototype and Fangio’s Supercortemaggiore car (still on display in the company’s Milan museum). Exact numbers are hard to come by, but nine Alfa Romeo Disco Volantes were apparently built: three C52s and six CMs. It’s believed the former comprised two spiders and one coupe, the latter two spiders and four coupes. It’s their fate that still fascinates enthusiasts today.

Soon after the Disco Volantes were retired, one coupe was purchased by Joakim Bonnier, then Alfa’s Swedish distributor, who had it fitted with a new roadster body by Zagato. This car eventually found its way to America, where Rodger Ward (later to win the Indy 500) and Bruce Kessler raced it for owner Shelly Spindel. A fourth car, rebodied by Carrozzeria Boano, was sold in 1955 to Argentine dictator Juan Peron. A fifth Disco Volante, with Ghia coachwork, seems to have disappeared, and it’s still equally hard to determine what happened to a sixth car.

Fangio gave the Disco its only race win with this coupe in the 1953 Supercortemaggiore.

The remaining Alfa Romeo Disco Volante was destined for all the glory, its six-cylinder chassis (the one originally developed for the proposed senior line) becoming the foundation for a series of stunning aerodynamic exercises by Pinin Farina. The first, dubbed "Superflow,” was a rounded, low-slung coupe with sharp tailfins, a glassy “bubbletop” with gullwing-type upper doors, and semi-open front wheels (portions of the fender tops were cut away, replaced by clear plastic).

This was naturally followed by “Superflow II,” a somewhat more conventional version. Its main innovation was plastic fins that appeared to be body color from outside but were transparent when viewed from inside, so as not to hinder driver vision astern. Next came a roadster of the same general style but with large faired-in headrests and no fins. Common to all three (built between 1956 and ‘59) was the longitudinal, concave bodyside sculpturing that PF would apply to the production Giulia Duetto of 1967 (still around today as the 2000 Spider Veloce).

The final effort was yet another smooth bubbletop coupe, this time with twin transparent roof sections (one above each seat) that slid back on rails for open-air motoring, an early expression of the T-top idea. The tail was similar to that of the previous roadster and, again, predictive of the Duetto’s. First seen at the 1960 Geneva Show, this Disco Volante ended up on a used-car lot in Denver only a year later but was rescued.

Like the Bertone B.A.T. Alfas, the Disco Volantes remain interesting commentaries on 1950s thinking about aerodynamics. They wouldn’t be the last wild-looking Alfa one-offs, but they were surprisingly practical. Too bad that none saw series production, but let’s hope that Alfa can still manage similar dreams in the future. Would you believe an Alfa UFO?