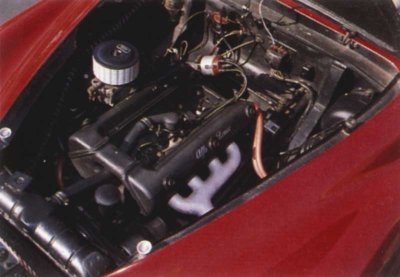 Twincam engines were an Alfa tradition by the mid-Fifties.

The 1900 was not only Alfa Romeo’s first new postwar design but the first Alfa with unit construction. Berlina (sedan) bodies were produced at the factory, but various coupe and cabriolet styles were offered by Ghia, Boano, Farina, Vignale, Castagna, and Bertone, with the majority produced by Carrozzeria Touring. Though all-new, the Alfa Romeo 1900 retained some of Alfa’s traditional engineering philosophy, particularly in its twincam four-cylinder engine and the 4-speed all-synchromesh transmission of the last 6C 2500.

The Alfa Romeo 1900’s drive was taken through a single-disc clutch and the 4-speed transmission to a live rear axle. The 2500’s swing axles were abandoned because the 1900 was to be a much higher-volume model, reasonably priced for an Alfa, and the live axle was more appropriate to assembly-line production.

Rear axle positioning was by a single lower trailing arm on each side and a triangulated link between floorpan and the top of the differential case, an arrangement that persists at Alfa -- albeit with variations -- to this day. Front suspension was also new, still independent but with upper and lower transverse A-arms and anti-roll bar. Coil springs and tubular shock absorbers were used all around, and brakes were aluminum drums with cast-iron liners.

In addition to being the marque’s first series-produced car, the Alfa Romeo 1900 broke new ground for Alfa in its left-hand drive. This did not reflect any company foot-dragging. Quite simply, Alfa Romeo had primarily built competition-oriented automobiles prior to 1950, and most two-seat racing cars had the steering wheel on the right. It’s still true today. There are two reasons for it. First, most closed-circuit road races are run in a clockwise direction, so positioning the wheel on the right is advantageous because it puts the driver on the inside of most turns. It also places him on the “pit side” of the car for faster entry, exit, and easier conversing with the team manager during pit stops.

A surprising number of Italian coachbuilders exhibited their artistry on the Alfa 1900 chassis -- witness this clean-lined coupe by Castagna circa 1954.

The Alfa Romeo 1900 was not conceived as a competition car, but in May 1950, Piero Taruffi and Felice Bonetto drove stock single-carb berlinas to 5th and 9th overall in the first running of the Carrera Panamericana (Mexican Road Race). These 90-horsepower Alfas, which the factory rated at only 93 mph flat out, averaged 77.8 and 76.5 mph, respectively, for the 2178 miles covered in the race from Ciudad Juarez on the U.S. border to EI Ocotal on the Guatemala border.

After the berlina arrived as the company’s bread-and-butter production model, Alfa Romeo 1900-series chassis and floorpan assemblies duly went out to the coachbuilders for lighter, more exotic bodywork. These coachbuilt styles seemed to be made mostly of aluminum (sedan bodies were steel) and this, plus somewhat trimmer overall size, made the coupe and cabriolet considerably lighter than the sedans.

A berlina Super appeared in 1953 with a slightly larger engine. Rated horsepower was unchanged, but the added displacement made the powerplant slightly more flexible. The Sprint, offered as a Touring-bodied coupe and Farina cabriolet, arrived in 1951 with 100 bhp at 5500 rpm. This was raised to 115 for the Super Sprint of 1954, when displacement was raised to 1975 cc.

Mention should be made of three very special 1953-54 show cars on the 1900 SS chassis. These were built by Carrozzeria Nuccio Bertone under the designation Berlina Aerodinamica Technica (aerodynamic sedan study) or B.A.T. This project spawned numerous ideas committed to many renderings and sketches, but only three cars -- B.A.T. 5, B.A.T. 7, and B.A.T. 9 -- were actually built. All still exist, by the way, in the U.S.

The B.A.T. series was an interesting experiment in automotive aerodynamics, characterized by rounded front ends designed for minimal air disturbance and smooth bodywork swept back to wildly exaggerated tailfins. They were the ultimate show-stoppers in their day and beautifully executed, but of no real value as transportation. Visibility was poor, crash protection nil, creature comforts marginal. Yet they were some of the most exciting designs to come from any coachbuilder, let alone on a fairly ordinary production chassis.