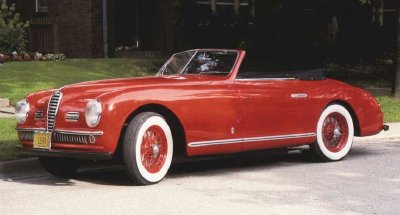 Looking more French than Italian, this Farina-bodied two-seat cabriolet was one of four body types offered in the postwar Alfa Romeo 6C 2500 series.

The Alfa Romeo 6C 2500 was one of the first postwar models produced by this classic Italian manufacturer during the years 1947 to 1952. By 1947, Alfa Romeo had dug out from the rubble left by the Allied bombing of its factory in Portello, a suburb of Milan, and resumed civilian car production with the Tipo 6C 2500. This dohc six-cylinder design was essentially an evolution of the prewar 6C 2500, which was built as a Turismo (five-passenger sedan), Sport, and Super Sport in 1939-43.

These cars were typical of contemporary Alfa Romeo engineering practice in having parallel-trailing-arm front suspension, previously seen on Alfa and Auto Union Grand Prix cars and later to be familiar on the Volkswagen Beetle, Porsche 356, and various Aston Martins. Springing was by coils. The independent rear suspension was by swing axles with longitudinal torsion bars.

Shock absorbers were tubular-hydraulic all around, and brakes were of the drum type. The rugged frame holding all this together was of channel section, with a sturdy X-member. A four-speed synchromesh transmission was controlled by a shift lever on the steering column. Interestingly, all Freccia d’Oros were built with right-hand drive.

Under the hood were six inline pistons working in a cast-iron block which had its crankshaft carried in seven main bearings. The cast-aluminum cylinder head supported two camshafts operating one inlet and one exhaust valve per cylinder; combustion chambers were hemispherical. Drive for the camshafts was by chain from the front of the crankshaft to a sprocket just below the camshafts, which in turn rotated the shafts via spur gears.

These Alfa Romeo 6C 2500s weren’t great cars, as they were rather large and ponderous, but they were milestones in the genesis of postwar car design. American enthusiasts saw them pictured in early issues of magazines like Road & Track and Speed Age, as well as The Autocar and The Motor from England. With bodywork by the cream of Italy’s carrozzeria, they were beautiful cars, so much cleaner and more refined than the ones we saw on the streets of our own hometowns.

And when we found technical specifications or underhood photos, we also discovered that their engines had twin overhead camshafts -- quite exotic for the day, at least in America. The only domestic cars powered by this type of engine were Indianapolis racers and, on a smaller scale, the dirt-track midgets of Frank Kurtis. There was also the dohc Duesenberg straight eight of the Thirties, but how many Yanks had actually seen one of those?

The combination of a racing-type twincam engine within all those lovely Latin lines was real dream stuff to a generation of budding U.S. car enthusiasts. Few Alfa Romeo 6C 2500s found their way to the U.S, but they helped generate much of America’s postwar enthusiasm for Italian cars.